The victims include two men, who were in stable condition, and a juvenile female who suffered from a "minor gunshot wound."
AP
By MICHAEL BALSAMO and CAROLE FELDMAN Associated Press 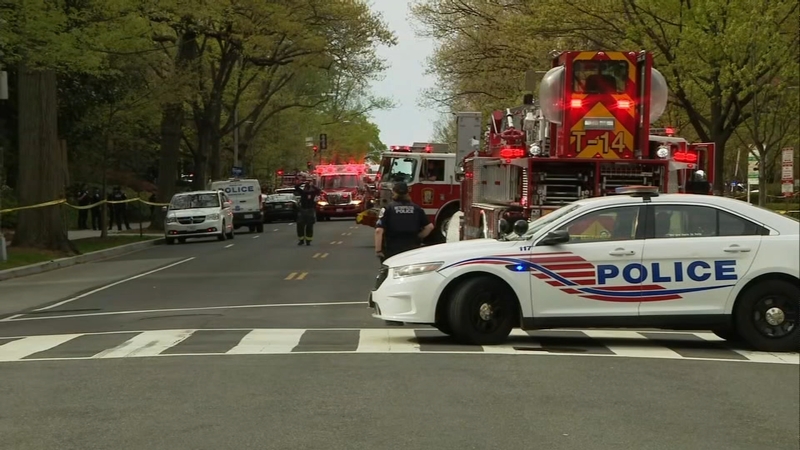 WASHINGTON -- Police and federal agents swarmed into a northwest Washington neighborhood on Friday after at least three people were shot in a flurry of gunfire. City officials warned people to stay inside because of an "active threat" as dozens of officers in tactical gear searched for the suspect.

The law enforcement officers responded to the scene near Connecticut Avenue and Van Ness St. in the Van Ness neighborhood of Washington shortly before 3:30 p.m. The incident is just down the road from Howard University Law School.

Police in tactical gear were seen escorting people out of an apartment building. Officers pointed their rifles upward toward other buildings and windows as the people moved quickly down the street with their hands raised above their heads.

The Metropolitan Police Department is warning people who live in the nearby neighborhoods of Cleveland Park and Van Ness to shelter in place. Assistant Police Chief Stuart Emerman said the victims included two men, who were in stable condition, and a juvenile female who suffered from a "minor gunshot wound."

Emerman said police were also aware of a video posted online that may be connected to the shooting, though he cautioned that investigators hadn't yet authenticated the video. Police were questioning witnesses at the scene and were still trying to discern a motive for the shooting, he said.

The University of the District of Columbia, which is located nearby, went into lockdown, telling students and staff to shelter and stay in place. In a tweet, the college said there was an "active shooting incident near student housing" and the suspect remained at large.

Video posted on Twitter captured the sound of bursts of rapid gunfire.