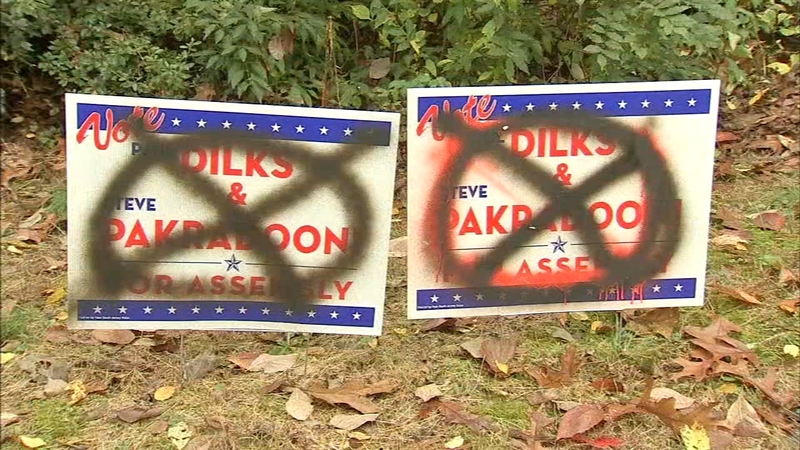 WASHINGTON TOWNSHIP, New Jersey (WPVI) -- A Washington Township, New Jersey woman is voicing her concerns over the repeated incidents of theft and vandalism of her political signs in her yard.

"I think it's a little more sinister than 'there's spray paint,'" said the resident who doesn't want to be identified.

She says she is concerned after signs she put on her Washington Township property for GOP candidates were vandalized sometime overnight Monday into Tuesday.

The signs placed at the end of her driveway on Bells Lake Road were spray-painted over the candidates' names.

The owner of the property said she's had the signs up for these GOP candidates since August but on 15 different occasions, they've been stolen.

"The painting of the signs creeped me out a bit, plus I didn't want anyone to destroy the property down the street, or down the mailboxes, or spray paint the mailboxes, so I thought I should say something," said the woman.

Just a week away from Election Day, political signs from both Democrats and Republicans adorn lawns all over Washington Township.

Democrats say they too have been victims of the normal shenanigans of stolen signs but haven't reported anything to the police.

There is no accusation being lodged against anyone in this incident. The property owner says she sees plenty of signs from both parties untouched nearby.