HUNTING PARK (WPVI) -- The push to get to back to normal is underway for businesses overpowered by fast-moving water after a massive water main break in Philadelphia's Hunting Park section.

A ShopRite supermarket was back open Friday morning, but Action News is told other stores were expected to remain closed for days or even weeks.

"We came in, we have to wipe things down. We have to move boxes and stuff," said Selena from Hair Buzz.

The salon was able to reopen, along with the ShopRite.

But many of the other stores, like Ross, a wine and spirits store and the Dollar General store, remained closed. 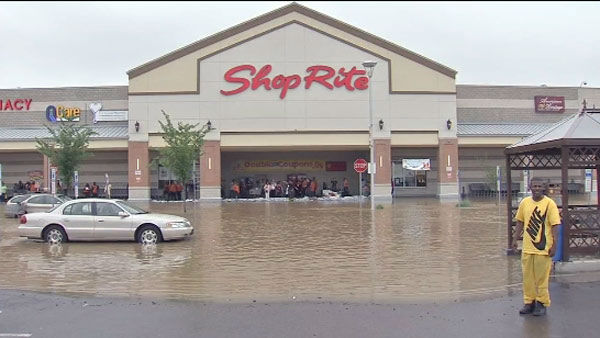 The 48-inch water main break at a shopping plaza at Fox Street and Roberts Avenue occurred around 2:45 p.m. Thursday.

"It was crazy, it was real hectic," said one person who was there.

Action News is told there was an announcement over the loudspeaker system at the ShopRite alerting customers to put their bags down and evacuate.

"So we had to leave all of our groceries there, couldn't even check it out. We had to immediately evacuate," said Genevieve Beale.

Firefighters made two water rescues, after employees of one of the clothing stores stayed behind to secure the building.

The Dollar Plus store is directly behind the main that broke. The manager had to let customers escape through the back.

"All of a sudden it started bubbling up. The water came up so fast that the front door got blocked, they couldn't get out," he said.

Some shoppers and workers had to be taken to safety in inflatable boats.

Others rushed out into the parking lot to save their cars.

They struggled through knee-deep water and most were able to get to higher ground.

The water was so strong that the concrete walkway above the main collapsed and the water submerged several cars.

Mud and debris filled the railroad tracks behind the complex, stopping trains.

It took about two hours for water department crews to shut off the flow.

The main has now been shut down and we are assessing damage. Why do mains break? http://t.co/pCUrPETzvt https://t.co/3q8gIq7168

"These valves are very, very large on a 48 inch main, they take several hundred turns each, they are not easy turns to make and this is all manual," said John Diguilo, Philadelphia Water Department.

The ShopRite was able to reopen but many stores may not be able to open for days for weeks.

A number of 48-inch mains run through the shopping center.

Back in January 2014, another main ruptured, damaging multiple stores. That break took four months to repair.