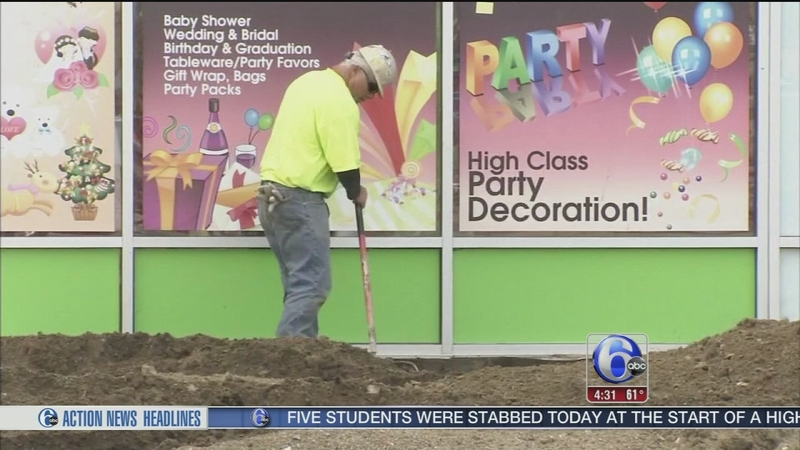 EAST FALLS (WPVI) -- Businesses are still recovering at a strip mall in the East Falls section of Philadelphia after a water main broke, dumping millions of gallons of waters in the parking lot.

The break on November 4 at Roberts Avenue and Fox Street left some shoppers in need of rescue.

Crews were still hauling out waterlogged waste on Tuesday with one last store, the State Store, preparing to reopen on Wednesday.

Bakers Centre, a $60 million strip mall was only months old in 2014 when the first water main ruptured, causing a 13 million gallon lake.

In 2015, scores of shopper had to be evacuated when a second main let lose 8 million gallons.

"This place is cursed," one shopper said. "I am going to tell you right now."
EMBED More News Videos

A water main break flooded a shopping center in the East Falls section of Philadelphia.

So, the question remains: Why are the 48-inch diameter transmission mains that run under the complex failing?

The Philadelphia Water Department said it can't find a cause.

"The results of all the examinations and reports have never come back conclusively to state what took place. So, there's always contributing factors, but there's been no smoking gun," said John DiGiulio.

A few months ago, the department decided it will replace the four mains.