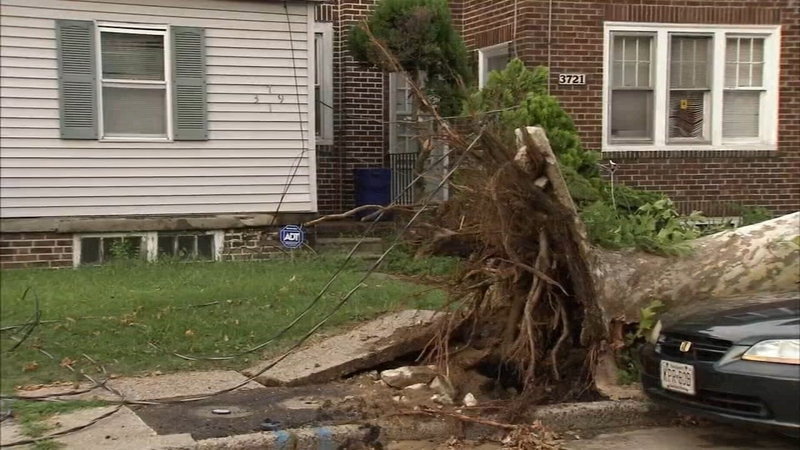 Severe storms leave trail of destruction across parts of NJ

MOORESTOWN, New Jersey (WPVI) -- A severe storm swept through parts of the Delaware Valley on Monday afternoon leaving behind a trail of destruction.

The Action Cam was on Woodland Avenue in Pennsauken, New Jersey where a large tree came crashing down on a car.

"We heard a loud boom and I heard the tree topple when I came out front," said Barry Preston.

Strong winds from this afternoon’s storms uprooted two trees which landed on this car and an SUV. Fortunately no one was inside the either vehicle. The downed tree took down power lines, several homes in Pennsauken are without power. @6abc pic.twitter.com/lJ4ZxB80ma

It was a similar sight in Moorestown, Burlington County where Chopper 6 found many trees uprooted.

Along Pine Lane, down live wires were sparking due to the storm.

In North Philadelphia, an Action News viewer captured a car going up in flames after lightning struck near Hancock and Diamond streets.

"It was like a big boom and then fireworks," said Laverne Scott.

"I stood in front of the door the whole time and watched as the fire progressed. And by the time they started putting it out, this was already on fire," he said.

Firefighters in Cherry Hill, NJ are also investigating whether lightning struck the side of a townhome.

The humidity-fueled storms have since moved off the coast but the heat remains.

A Heat Advisory remains in effect until Tuesday, not expiring until 8 p.m.

Counties affected are those at the center of the region near I-95 and all of SE Pennsylvania. Highs will be in the low to mid-90s, but it will feel like 100 or higher at the height of the afternoon heating.