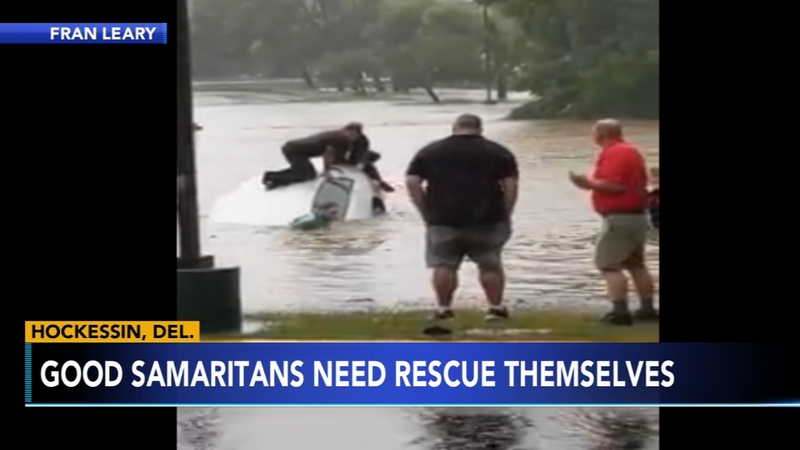 HOCKESSIN, Delaware (WPVI) -- An extraordinarily risky rescue effort played out in the parking lot of a Hockessin shopping center during the flooding caused by Tropical Storm Isaias.

It began with a sinking car and ended with several citizen heroes needing help themselves.

The Hockessin Fire Department says all five people involved in this incredible story are extremely lucky to be alive.

The dramatic and dangerous situation started around 11:45 a.m. Tuesday when an 80-year-old man took a wrong turn heading home from an appointment and ended up at the Lantana Square Shopping Center.

People jumped into action after a daycare was heavily damaged during Tropical Storm Isaias.

The water was quickly rising and the man was trapped in his car.

Jose, a shopping center employee, rushed in to try to break the windows and free the man from the water, as it continued to rise.

That's when the surge sucked the four men into a large drainage pipe that carried them hundreds of feet - all the way to a creek - where they were found clinging to trees.

Fran Leary also works at the shopping center. He captured much of the rescue on video.

He says he spoke with Jose, who is doing okay, but is understandably shaken up.

"He said he had no control," Leary says. "It sucked him under. He was getting banged up and tried to grab onto anything he could. He thought his life was over. He saw himself at his funeral. He said goodbye to his wife and it was very scary."

That pipe has proven deadly in the past. Two boys were swept in it nine years ago during Hurricane Irene and they did not make it out alive.

First responders had to navigate that parking lot in boats, rescuing at least eight people from the water there on Tuesday.

As for the man trapped in the car, the fire department managed to get him out seconds before the car sank from underneath them.

His daughter says he is sore, but grateful to be alive.

"Right now I am incredibly thankful to the Hockessin Fire Department and the four people who tried to help him and got sucked through the storm drain," says Theresa Craparotta. "I am so thankful that they are alive and well."