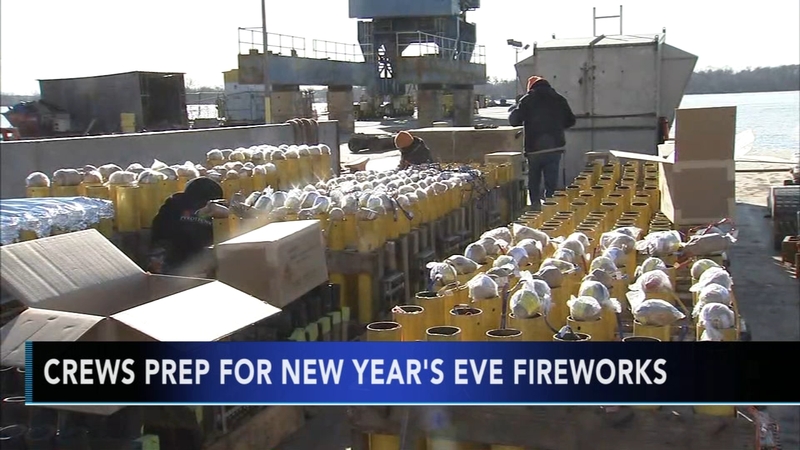 SOUTH PHILADELPHIA (WPVI) -- Despite the frigid forecast, the tristate region is moving ahead with outdoor New Year's Eve and New Year's Day celebrations as planned.

On Friday, the Mummers said their New Year's Day parade was still on.

They planned to keep an eye on the weather throughout the weekend.

In the meantime their set-up work was continuing for Monday's strut on Broad Street.

At the Navy Yard in South Philadelphia, workers were busy loading up barges for the big New Year's Eve fireworks display at Penn's Landing.

It takes three days for the crew to set up for the show on the Delaware River Waterfront.

Normally fireworks are launched both up into the sky and also off the side of barges floating in the river.

This year, because of the extreme cold and icing on the river, technicians will forego all side launches.

Organizers say they expect fans and spectators to still turn out on New Year's Eve, but the extreme temperatures might prompt them to arrive at Penn's Landing a little later than usual.

Even though the freeze continued for another day, many were still out and about.
EMBED More News Videos

The Rothman Rink in Center City was packed with bundled-up skaters Friday afternoon.

The Kanuck family came from Yardley to cure their cabin fever.

"We were cooped up all week and figured we'd come out and burn off energy and have fun. Enjoy Philly," Mark Kanuck said.

Carter Kanuck made sure he had on three layers to stay warm.

Behind the counter, the staff keeps warm by jockeying for time next to the heater.

"I just move around and stay with our heater over here. I'm pushing him to the side for the last five times to get some heat," Graham said.

Meanwhile in South Philadelphia, crews are busy preparing Sunday night's fireworks displays. The cold is not making the massive job any easier.

Kevin Stead of Pyrotechnics said, "You're doing a lot of work wiring, taking gloves off, watch out for frost bite, everybody tries to keep an eye on each other to make sure everybody is doing good."

The show is expected to go off just like last year. However, Organizers say they've seen an uptick in reservations for nearby indoor parties.

Emma Fried-Cassorla of the Delaware River Waterfront Corporation said, "Dave and Busters, Fringe Arts, Spirit of Philadelphia, Independence Seaport Museum and all have really fantastic parties with best viewing locations of the fireworks."

Many folks told Action News they plan to stay warm inside Sunday night to avoid being out for any length of time in the forecasted bitter cold,
EMBED More News Videos

Michelle Tenuto of South Philadelphia said, "We will stay home, have a house party, which is low keyed, nothing crazy, and with my kids."

At 6th and Morris a Dino's Party Center prepping for New Year's 3 to 4 days. They inflate 15,000 balloons, most will decorate restaurant and banquet halls.

There were plenty of walk-ins, scooping up hats and horns and those 2018 New Year's glasses for home parties.

Stephanie Primerano of South Philadelphia buys the glasses every year for herself, brother and husband.

The signature gathering in Philadelphia is the Riverfront fireworks, but with a forecast of numbing cold, the secret is to find someplace to watch from inside which brings us to the SugarHouse Casino. On the second floor they are prepping for a party. If you are over 21 and have $100, you can watch the fireworks from inside.

Wendy Hamilton, GM of SugarHouse Casino said, the good news about coming to the SugarHouse, is you can have a whole night of fun, and step outside for 15 minutes for the fireworks, and come back in and get toasty warm..."