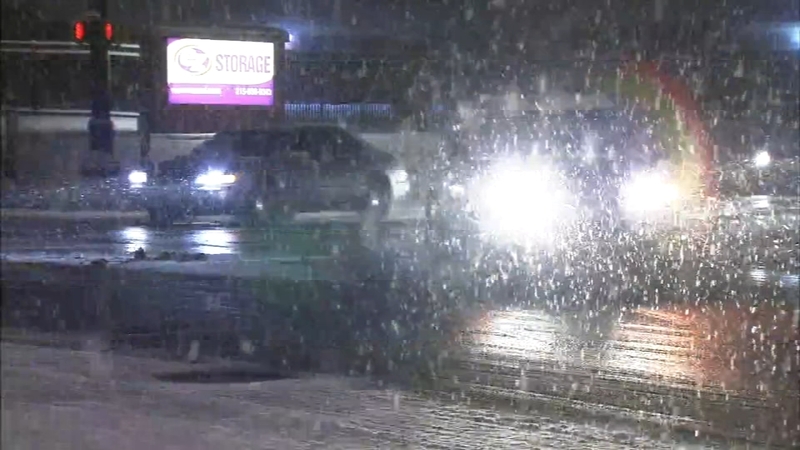 LOWER MORELAND, Pa. (WPVI) -- As the snowfall tapered off Saturday night, the temperatures started to drop. And that raised the risk of ice on the roads.

Indeed, Action News found the snow starting to stick on the roads in Montgomery County.

Drivers we spoke with said they planned on taking their time.

"I travelled from Hatfield all the way down here so the roads aren't that bad. A couple slick spots but other than that it wasn't that bad," said Jim Driscoll of Northeast Philadelphia.

"They're getting there. It's starting to stick now, but it's not too bad with all-wheel drive," said Joseph Vazquez of Lower Moreland, Pa.

These drivers didn't run into any major issues, but they were still anxious to get home for the night.

David Vinciguerra and 4-year-old James were on their way home to Langhorne, Pa. from a Christmas party.

"Not bad. (The plows have) been keeping up with it on the secondary roads. Beyond that it's been a little slippery, but it's been good getting around," said David.

We found one snow removal crew which planned to be working all weekend, with more than a dozen properties to clear.

The boss told us this kind of work doesn't usually come this early.

"I'm a landscaper by trade and most of us are still doing leaf cleanup. As you can see, the back of the truck is filled with leaves," said Mike O'Brien of O'Brien Environmental Design.

Meantime, Montgomery County is under a Code Blue Alert until 9 a.m. Monday, meaning the temperatures or wind chills are forecasted to be below 20 degrees, and conditions could be dangerous or deadly for those without shelter.

If you see someone in need of shelter in Montgomery County, you can contact the Your Way Home Homeless Street Outreach Team at 610-482-5483.