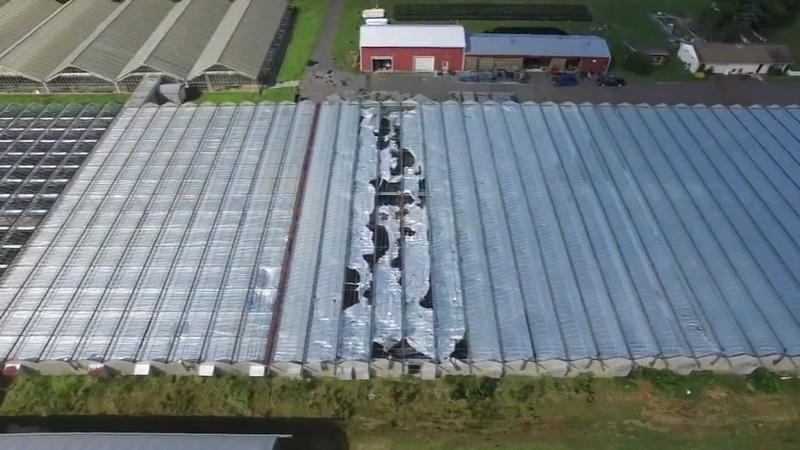 Higher than average tornado numbers in Pa., N.J. and Delaware

HIGHTSTOWN, New Jersey (WPVI) -- Pennsylvania, New Jersey and Delaware have all seen higher than average numbers of tornadoes this year. Action News set out to find out why the tornadoes have been so frequent.

Nick Tomlinson, the head grower at Voorhees Greenhouses in Hightstown, N.J., says it will take months to fully recover from the tornado that shattered the ceiling of a greenhouse.

"The glass shattered, glass went everywhere and then it picked up all the glass and we have debris about a half mile down," Tomlinson said.

An EF-0 tornado blew through last week, leaving a big mess to clean up and people wondering: why all the tornadoes?

According to the National Weather Service, Pennsylvania sees an average of 16 tornadoes in a year. New Jersey normally sees two, and Delaware has an average of one.

This year so far, Pennsylvania has had 33 tornadoes--three of them in our area. New Jersey has had eight, and Delaware has had two.

Action News Meteorologist David Murphy says it has to do with the jet stream staying south.

"What's happened this year is that while you usually see most of your tornadoes in the spring and early summer, usually in late summer the jet stream is so far north up in Canada that you don't have all the pieces that you need to make a tornado forming storm," said Murphy.

It all starts with a severe thunderstorm with air coming in from different directions, creating rotation. Then, the jet stream comes in.

"If you can get the jet stream going right across the top of one of those storms it enhances the uplift, and that's what gives you a tornado," said Murphy.

Action News meteorologists say there's not enough data to say that's the cause of all the tornadoes, but add this year will definitely be one to study going forward.

-If you hear thunder, head inside.

-During a tornado, head to the basement or lower floor.