Ice from truck crashes into driver's windshield on I-95 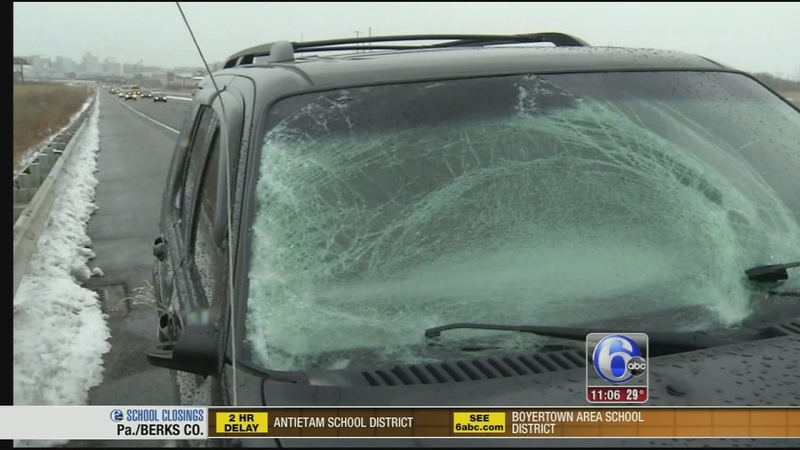 Ice from truck crashes into driver's windshield on I-95

WILMINGTON, Del. (WPVI) -- Andru Duranso of Dover, Delaware, says he was driving on Interstate 95 Wednesday, just south of the 295 split, when a large piece of ice flew off a tractor trailer rig and crashed through the windshield of his SUV.

"I had glass all over my lap during this whole thing that went down," said Duranso. "Tried to get the license plate number, but at that point in time, I was more focused on going ahead and pulling over, just for safety precautions."

The ice missile also sheered off his passenger-side, rear-view mirror, but fortunately he was not injured.

"The police said I wasn't the only one that this happened to today," said Duranso.

While Delaware does not have a specific snow or ice removal law on the books, since 2014, there have been several bills introduced that would allow officers to fine drivers who have not properly cleared their vehicles. But, so far, no legislation has been passed in the state.

Delaware State Police have warned drivers in the past about removing ice from their vehicles.

Back in January 2014, the police posted this message on Facebook:

Troopers remind motorists to remove snow and ice left on a vehicles hood, windows and roof, which can become a deadly projectile, creating a hazard not only for the operator of the vehicle but for all motorists on the road. Taking few moments to clear ice and snow from your vehicle could prevent a disastrous and possibly fatal crash from occurring.

On Wednesday, Action News filmed a FedEx truck traveling though King of Prussia along Gerdes Boulevard. As seen in the video, it had not been cleared of snow and ice, and it seemed to keep flying off almost every time it hit a bump in the road.

"It's really a public safety issue. People just have to take the time before they get going, clear the snow and ice off their vehicle," said Brad Rudolph, PennDOT.

Some motorists tell us they had to do a lot of dodging and weaving to avoid getting hit by flying ice or snow.

"You better see it coming because if you don't, you might get overtaken by it," said Greg Pyles of Morgantown, West Virginia.

"Sometimes it might cause an accident to be honest with you," said Lonnie Merlino of West Philadelphia.

In Pennsylvania and New Jersey, you can be fined up to $1,000 if ice and snow flying off your vehicle injures someone or causes damage.

"We just ask you to take those few minutes before you get going, while your car's warming up, to clear your vehicle," said Rudolph. "Better safe than sorry."