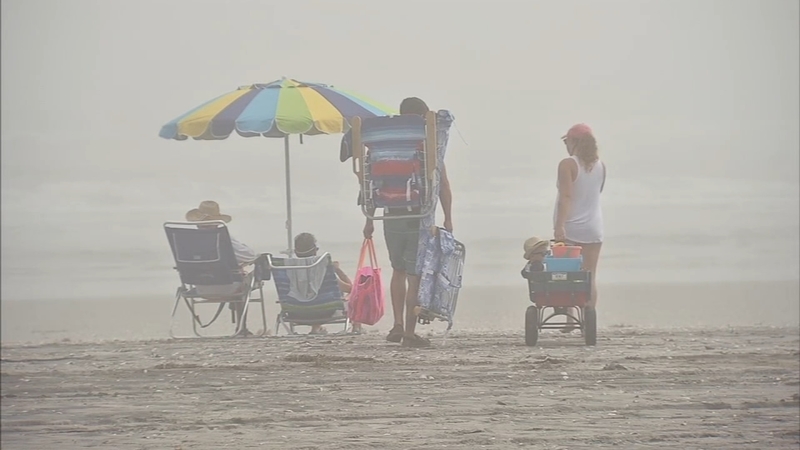 New Jersey officials are urging residents to take precautions even though the bulk of Hurricane Florence is expected to mostly miss the state.

Gov. Phil Murphy said Tuesday that current forecasts show that Florence is likely to strike a "glancing blow" to New Jersey. It's expected to make a more direct hit on the Carolinas and Virginia.

That still means New Jersey's coastal areas will get heavy rains, some flooding and high winds.

In contrast to former Gov. Chris Christie's warning to "get the hell off the beach" before 2012's Superstorm Sandy, Murphy asked residents to "please get off the beach."

He even added a "pretty please" for good measure.

As New Jersey officials keep a watchful eye on Hurricane Florence we spoke to plenty of beach-goers who say as long as it's warm enough and sunny enough they were going to Cape May.

"We came out this morning thinking we'd only have the morning because they predicted rain this afternoon and it was so misty you could hardly see past the first wave and it cleared up," said Betsy Westfall, of West Chester. "It's beautiful, I'm glad we're here"

Meanwhile, over at the Cape May County Office of Emergency Management officials are keeping their fingers crossed.

At this point, Hurricane Florence's center is approximately 950 Miles Southeast of Cape May.

And while dangerous rip currents will likely develop here this weekend, it still seems like the hurricane will remain well south of the Jersey Shore when it makes landfall.

"At this point, we're pretty confident we think we're going to get some minor coastal flooding, some light winds, probably rain," said Marty Pagliughi, Director of Cape May County Office of Emergency Management. "A rain event would be on the radar for us because it may last a couple of days, depending on what the storm does after it makes landfall."

And in shore-towns like Avalon, local leaders are anticipating the best but preparing for the worst.

"We watch the weather very carefully here being a barrier island for New Jersey," said Avalon Police Capt. John Roscoe. "We will monitor this storm as it approaches the coastline. And generally with a storm like this, if it hits south, we have to be concerned with still high winds, heavy rain and surge from the storm."