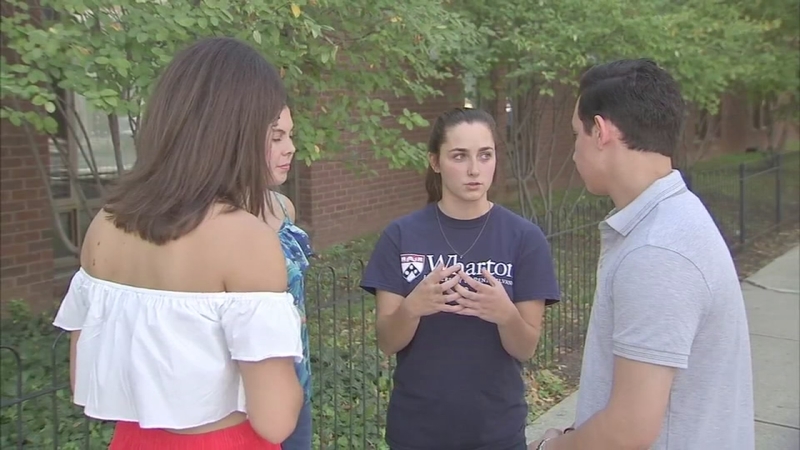 PHILADELPHIA (WPVI) -- With a large Latino population in the Delaware and Lehigh Valleys, local relief efforts are underway for the victims of both Hurricane Maria and the deadly earthquake in Mexico.

At the University of Pennsylvania, the Mexican Student Association had a goal of collection $10,000.

"The reason why it is money-based is because we are here, we can't be there and pick up what is left in the streets. But the money can go to medicine and things that are needed," said Larisa Morales.

"You are far away and you want to do something to help but you can't, so you find a way to send funds," said Anita Vazquez.

Thankfully, the students we talked to say their families are all safe but we know the same is not true for others in Mexico.

The images and stories are heartbreaking, and students back here at home are hoping that their small act kindness will play a big part in helping those in need.

"We are no experts, we don't know what is needed, but we know that this money is going to end up in the hands of the people that do and have put a lot into his situation," said Morales.

While Mexico deals with the aftermath of an earthquake, Puerto Rico is reeling from the effects of Hurricane Maria. The storm pounded the area causing flooding and other damage.

Pastor Adan Mairena, with West Kensington Ministry, says money and resources are always beneficial but prayer is something that everyone can give free for those in Mexico and Puerto Rico.

"It is a healing process that takes place. We are a global community, so when one of us hurts, all of us hurt," he said.

El Concilio, a local Latino organization, is collecting funds through its website, and Organizers say this weekend's annual Puerto Rican Day festivities will be used to raise much need funds as well.

"Unfortunately it is not the first time people go through trauma and tragedy, people are survivors and have resiliency, grit and people are strong," Mairena said.

On Wednesday night, Action News caught up with organizers of this weekend's annual Puerto Rican Day festivities in Philadelphia. They say the events will be used to raise much-needed funds.

"We're all excited for the Puerto Rican Day Parade," said Omarys Rodriguez of the Palante Dance Group. "We want to try to remain strong on this side because we do have family members over there."

A social media campaign will help raise money along with volunteers who will walk the parade route to collect donations.

And El Concilio, a local Latino organization, is collecting donations through its website.

Meanwhile, the University of Pennsylvania's Mexican Student Association is leading efforts to help in the aftermath of Tuesday's devastating earthquake that killed hundreds in Mexico City.
"It's been so overwhelming to see everything," said Penn senior Sagid Manriquez. "That's been devastating."

Jens Honack, a native of central Mexico, has been in constant communication with his family back in Mexico City.

"It's really difficult because you feel helpless from here," Honack said.