Philly residents ask: Where to put all this snow? 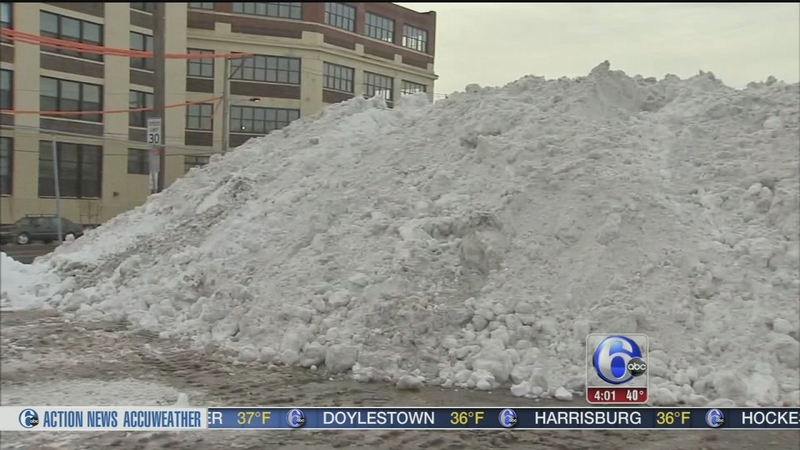 VIDEO: Philly residents ask: Where to put all this snow?

PHILADELPHIA (WPVI) -- Philadelphia is trying to dig out from the fourth-largest snowfall in city history.

But with so much snow, many are wondering where to put it all.

At Broad and Washington crews could be seen lifting it, loading it, and piling it up in an open lot on the corner.

People stopped by to watch, saying they liked this approach.

"Usually the piles are in the other lane and then you can't park," said Steve Kulus of South Philadelphia. "It's awesome."

Some city residents we talked to said they had no choice but to do exactly what City Hall does not want you to do: throw it into the street.

"There's nowhere to put it. You don't want to put it where someone else shoveled it. You king of throw it in the middle of the street," said Herb Brown. "I have nowhere else to put it."

At 7th and Poplar in North Philadelphia, it was a confounding sight on Monday afternoon where someone dumped a huge amount of snow.

Drone video from overhead showed the massive hill that stretched from one end to the other, trapping cars parked on either side.

City officials tell Action News they have no idea where that snow pile came from, but speculated it could have been a private contractor dumping it there. Those officials said crews will be sent out to remove it at some point.

"I have my two of my work vehicles here. I am trying to my work done. We're stuck in here, we're out shoveling the snow. I just think it's crazy,' said Joseph Cakeley.

With the sun shining, ice and snow is coming down from buildings. A woman was injured Monday when a chunk fell off Hahenmann Hospital.

In Mayfair, the chairs were out to save parking spots which, again, is something the city says you cannot do.

Overall, we heard high marks for the city's cleanup effort so far.