Sarah Bloomquist reports from Wilmington, North Carolina; the city is virtually cut off by flooding

WPVI
By Sarah Bloomquist
WILMINGTON, N.C. (WPVI) -- It's now been days after Hurrican Florence made landfall and still the water is coming in waves Sunday.

The streets are flooded and power crews are working in it to try to get at least some of the lights back on.

Sharon Spencer walked through the water up to her waist.

"This is as much flooding as I've ever seen," she said. "This is really bad."

Jerry Bentley and his son took it upon themselves to make the road to their home accessible again.

Tempers flared when the driver of a gray pickup tried to inch his way in without waiting.

Elsewhere, people are waiting patiently in long lines like at this Harris Teeter supermarket- the only place open in the area.

"We're out of everything. Bread. Milk. Just food," said Ruth Derbyshire. "We also need ice so we can keep our other food to where we're able to use it."

Sarah Bloomquist reports from NC as Florence continues to bring waves of rain during Action News at 10 p.m. on September 15, 2018.

The region is nowhere near out of the woods. Rain continues to fall. In fact, at one point Saturday night, we were under a tornado warning.

Rivers like the Cape Fear behind me are about to crest in the overnight hours and mandatory evacuations are in effect in some spots.

Across Wilmington, streets are flooded out as heavy rain continue to pour down for another full day.

Rivers like the Cape Fear are rising faster than predicted - and North Carolina is looking ahead to flooding that could be catastrophic.

In the historic district, trees are down on nearly every single street. Some of these trees have stood for many years - but it was Florence that took them down.

A giant tree came down in front of a church. Nearby, a sinkhole opened up in the street.

Power lines lay across roads. The siding has blown off many buildings. High winds stripped the roof off of this one. But not much can be done about any of it until the rain moves out.

Timothy Bean of Wilmington, NC added, "We got to get past this point. Get the tropical storm out of here. Get the rain gone before we can even start repairing."

"I've been through Hugo in Delaware."

Louisa Nicolas moved here from Newark, Delaware three years ago. She got out with her girls for a look around.

She said, "I've never seen, and it was a one that hit us. So, I don't think I'll be staying around again for any other hurricane."

So much destruction but for her, there was one sight that brightened the day for this Delaware Valley native.

"And then to see that Action News van again. A bright spot in all of this. I was like hay, so it was great to see you guys again. Stay safe that's all," said Nicolas.

Tonight, here in Wilmington, some 200 streets remain closed because of downed trees and power lines. Those all need to be cleared out before power crews can move in and start doing their work.

Officials estimate that by the time Florence moves out. Some 1.3 million people may be without power.

The sun has set and the wind and the rain just have not let up. This is supposed to go on through the night in the Carolinas.

Action News reporter Sarah Bloomquist has been braving the elements in Wilmington, North Carolina all day.

Tonight we're getting a look at some of the damage. We have to be careful because power lines are down.

A massive tree came right down on top of a Sonic drive-in. There will be crews out here once the sun comes up. They're already going to start working on trying to remove it.

We asked Brandon Brinkley from Aftermath Tree Service what are you seeing around town tonight? A lot of trees down. "Things coming down with root balls, a lot of damage. It's a mess. Most of the trees that came down are on structures. There's not much on the yard. A few on the roads." Looks like most of them came down and hit houses and buildings or companies.

Earlier today a tree came down on a home in Wilmington, killing a mother and infant inside.

The crew drove the streets Friday night in pitch black with unseen damage in the darkness. Several more trees were down, and almost impossible to see.

Even the Waffle House, which never, ever closes was closed.

The Action News crew came back to their hotel which like the rest of this city has no power so they will be relying on things like headlamps and flashlights to make their way around. It could be many, many days before power is restored.

The Action News crew was among a number of people staying at a hotel in Wilmington.

"We live about two miles away from here, and we have giant pine trees all around the house, so it was just too dangerous to stay there," Brian said.

"I am glad we came here instead of staying at the house since it was a pretty vulnerable spot with those trees," said Cooper.

Throughout the day, the wind has been whipping and rain coming in waves. Trees are down on surrounding streets and parking lots, and roads are flooding out.

Still, Amy Fisher and her family are rolling the dice and going home.

"We're just heading back home. We have a generator at our home. We're just leaving the hotel. We've been here overnight. Winds have calmed down so we're ready to head out," said Fisher.

She said she hoped there would only be slight debris and no real damage at her home when she returned.

6abc's Sarah Bloomquist is in North Carolina ahead of Hurricane Florence's arrival as reported during Action News at 11 on September 13, 2018..

"This is typical," said Corey Lewis of Wilmington, North Carolina. "It's gonna get worse before it gets better, of course, but we'll be alright."

Lewis had no choice but to get Rocky out for a walk in the steady rain.

For those who aren't alright on Friday, Avery Johnson is in from Texas to help make rescues.

"Our job is basically to find the people that can't get out of their homes if the floodwaters are too high, save them and go from there," Johnson said.

On Thursday we talked to Wilmington's mayor about what he expects to happen in the hours ahead.

With Hurricane Florence making a super slow march to the coast, residents who stayed have nothing to do but wait for the worst of it.

Thursday, some got out for a final stroll along the Cape Fear River. They feel at this point they're ready for the wind and rain.

"I expect a lot of rain, a lot of winds the next couple of days. I expect storm surge," said Kevin Gray of Wilmington, North Carolina. "We are on a marina so we're worried about the boats that are still in there. We'll be fine."

This historic city expects a double whammy with the river on one side, the ocean on the other. They'll get a storm surge and the river is forecasted to tie the record when it crests.

Mayor Saffo said he knows flooding and other emergencies are inevitable.

Florence reminds him of another storm that left a lasting impact on our area.

Just looking at the size of the storm, and the way it's moving, and the way it may brush us. It reminds me of a Superstorm Sandy," said Saffo. "It was a big system, dropped a lot of rain, was slow-moving and did a lot of damage.

One bright spot. Waffle House is still open. Even FEMA watches to see whether the 24/7 spot keeps operating to help determine its disaster response.

"Waffle House is the new standard," said Saffo. "If they close, it's gonna be bad."

Sarah Bloomquist reports on Hurricane Florence in Wilmington, N.C. during Action News at 12:30 p.m. on September 13, 2018.

On Wednesday to stay or go was the question millions in the path of Hurricane Florence were faced with.

On the barrier island of Wrightsville Beach, North Carolina, officials declared everyone should be out by 8 p.m. Wednesday night.

The bridge leading from the island to Wilmington, North Carolina was shut down in anticipation of the storm's arrival Thursday.

With panic setting in, Wilmington residents like Jillian Warren and her mother moved to a hotel on higher ground. They were pushing a cart full of the belongings they said could not be replaced.

Sarah Bloomquist reports from North Carolina ahead of Hurricane Florence on Action News at 10 p.m., September 12, 2018

"It's the kids' clothes, their favorite toys," said Pan Warren. "We have to go back to get the pets because we have a dog, and two cats, and a turtle and a fish and three guinea pigs and we gotta go get them."

Around Wilmington, every single store and restaurant is closed. Gas stations are completely out of gas. Car dealerships cleared out entire inventories ahead of the storm.

Earlier Wednesday on nearby Wrightsville Beach, homeowners filled sandbags, put up plywood and got boats out of the water. Florence is coming.

Locals knew they needed to leave the island, but had a big dilemma- do they stay close and ride out the hurricane or go farther inland and risk being away from their homes for days or even weeks.

"I think we're going to go to a friend's house in town and make the call tomorrow and see if it's worth getting out of town," said Brian Brueck.

Most said this storm feels different than those in the past, it's a lot larger and slow moving so the potential for damage is great.

"I've been here 10 years now and this one has a little bit of a different temperament than the other ones," said Jayme Mayers. "I evacuated once before because I had small children, but this one is a little different because it may stall off the coast and be here for a few days and we've already had a lot of rain this summer. It could have a high impact on the area."

That seemed to be the main concern of those who were still on the island Wednesday afternoon: just how far they need to evacuate.

"We've been toying back and forth with whether to stay, whether to go. Clearly, we have to leave the beach, but whether it's to stay in Wilmington," said Kristi Jarnagin. "We have a daughter in Chapel Hill. She really wants us to come to Chapel Hill but we don't want to get stuck and not able to get home."
The ability to get back after the storm is what appears to be the deciding factor.

"If you leave in this kind of rain, you can't come home and that's the big thing," said Spencer Jarnagin. 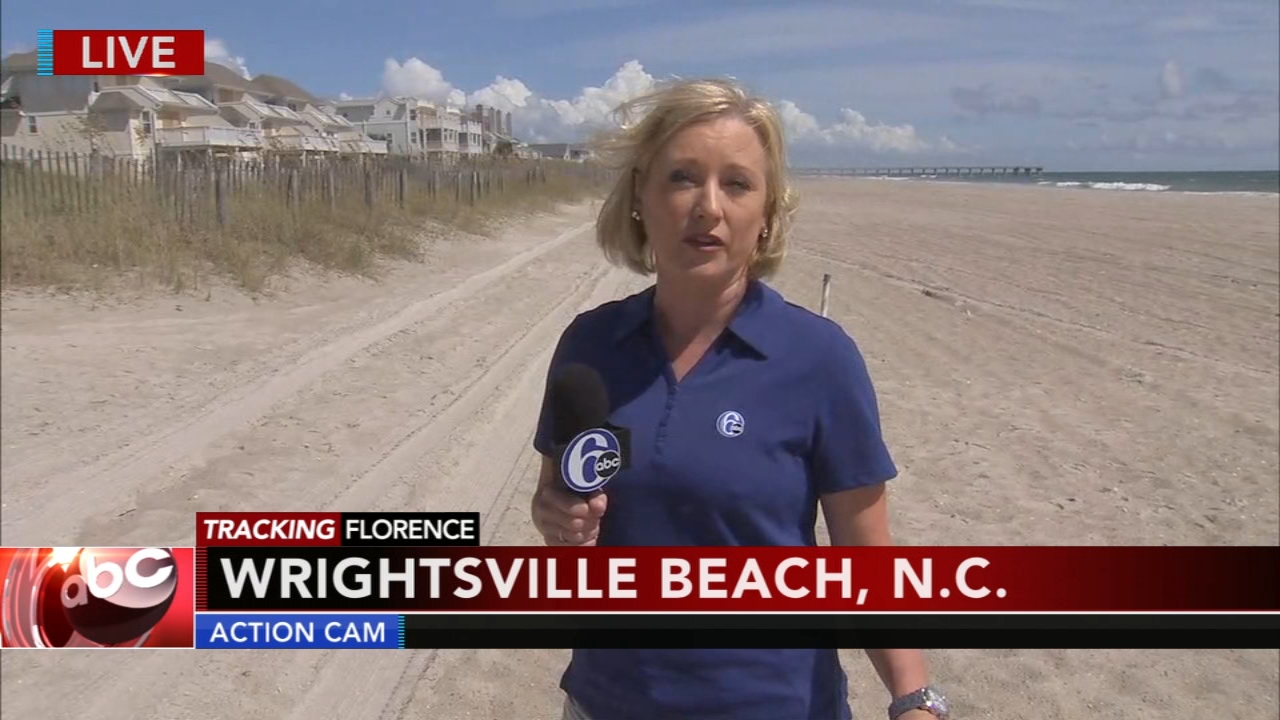 Sarah Bloomquist reports from North Carolina as Hurricane Florence looms. Watch her report from Action News at Noon on September 12, 2018.