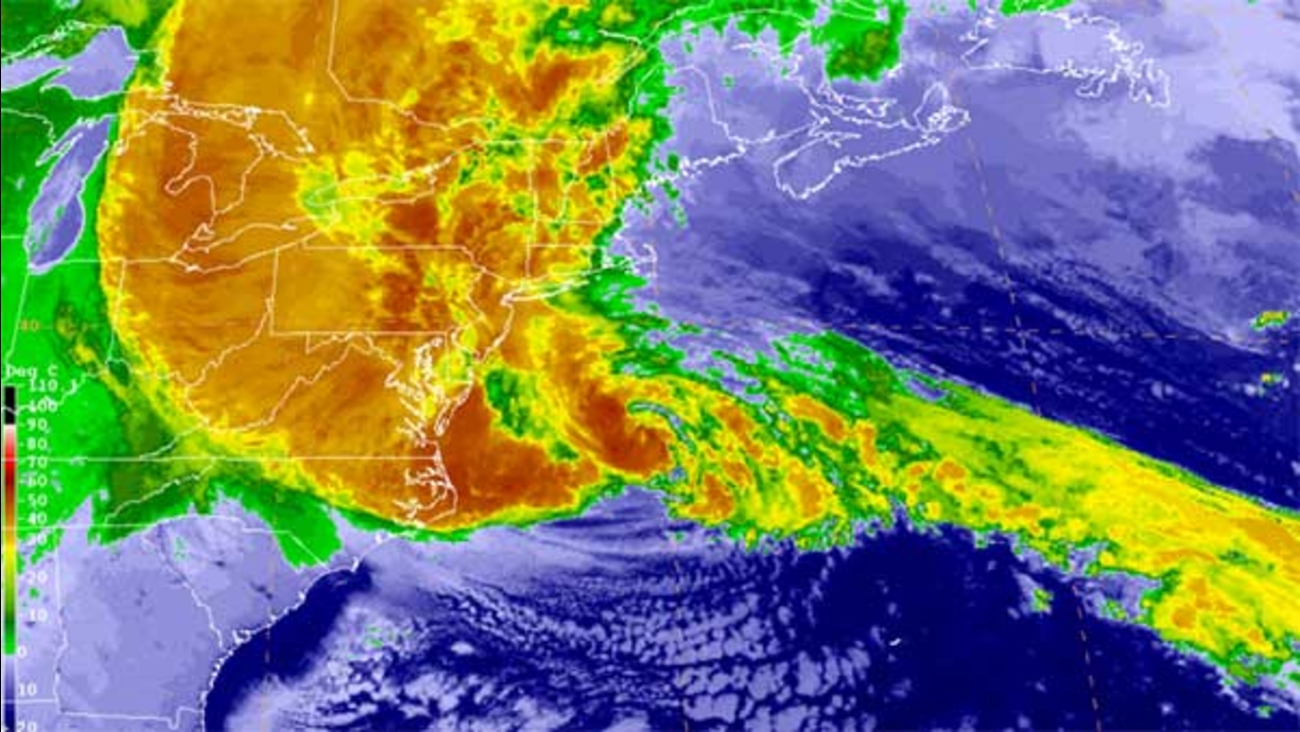 To this day there are still several communities trying to get back on their feet and repair their once beautiful homes and landscapes.

I remember first looking at this storm about eight or nine days out. At first glance every single forecast model took the storm out to sea except the European Model. So before I had the chance to really analyze anything, it didn't appear that there was going to be much to worry about. After all, out of 17 forecast models, 16 of them showed the storm going out to sea.

But then I started looking at the upper levels of the atmosphere and I remember thinking to myself, 'this isn't good.' That very same day I had a conversation with Dawn, one of our producers here at 6abc, and told her that I had a really bad feeling about this storm. 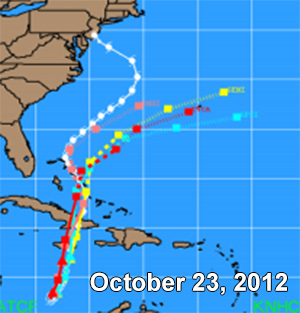 I told her that only one forecast model showed a hit, but I thought it was that one forecast model that actually had the right idea, which was strange because up until that point a storm that far north in terms of latitude had never made that left hand turn to the coast before. 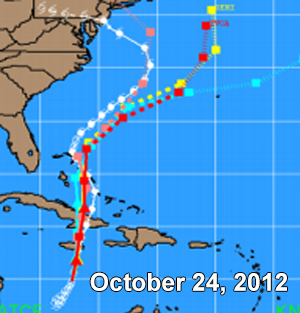 Day after day it didn't budge one inch. That's when I knew that we were in serious trouble.

You see, a forecast model has a bad run all the time. Sometimes they just initialize wrong. As a forecaster you can usually tell pretty quickly, dismiss it and wait for the new update. Then once that new update comes in the model fixes itself and looks more like it should with a more complete and correct solution. So when the European Model held its ground day after day, never changing its solution, I knew we were in trouble. 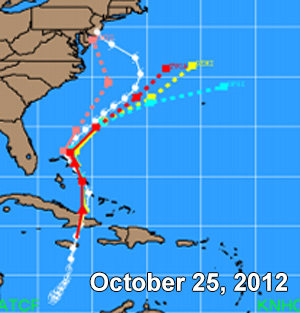 Then, when you realize that the European Model is the model of choice when dealing with these types of east coast storms, that didn't make me feel any better about things. Sure enough, once the storm passed over Cuba, some of the other models began to see what the European Model had been showing all along.

Now instead of being out numbered 16 to 1, it was more like 12 to 5. Then twelve hours later it dropped down to 9 to 8. Twelve hours after that it was actually the out to sea scenario that was now out numbered. At that point everyone knew we had a nightmare on our hands. 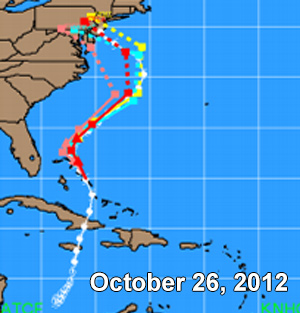 There were several other major contributing factors with this event other than Sandy itself. For starters, there was a full moon when the storm made landfall. So the tides were already going to be higher than normal to begin with. Second, the eye wall came onshore during high tide. Combined, what should of been a minor storm surge turned in to a complete nightmare.

Because of the glancing blow from Hurricane Irene the year before and the major forecasting letdown, many folks who live down the shore thought Sandy would do the same thing. Therefore, they chose to stay with their homes even though mandatory evacuation orders were given.

But Sandy's track was different. You see, there's four quadrants to a hurricane: upper left, lower left, upper right and lower right. It's the upper right quadrant that is the strongest part of the hurricane because not only do you have to contend with the hurricanes winds, but within that quadrant you also have to deal with the storm's forward movement. 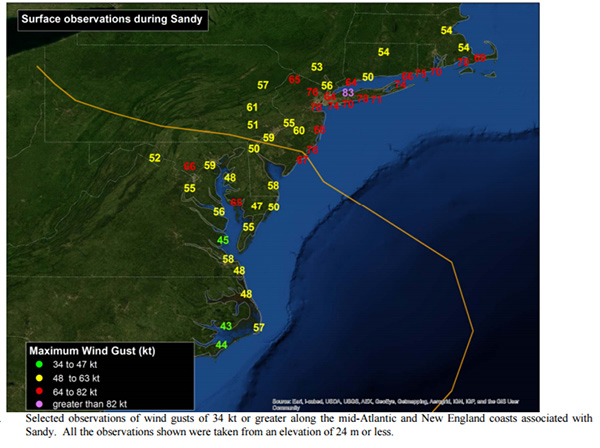 So whatever the storm's forward speed is, you add that to the hurricanes sustained winds. That's what's meant a lot of times when you hear the words higher gusts.

For example, let's say we have hurricane X and hurricane X has maximum sustained winds of 150 mph and is moving north at 30 mph. The wind gusts in the upper right quadrant, at the very least, are going to be 180 mph (150 + 30 = 180). The opposite effect is true in the lower left quadrant because the sustained winds are fighting the storms forward movement there (150 - 30 = 120).

Because of the track of Hurricane Irene the year before, it was that lower left quadrant that hit us and not the stronger upper right quadrant. So we actually got hit with the weakest part of Irene.

But Sandy's track was different. It wasn't moving up the coastline - it was making a left hand turn. Therefore, when the eye came onshore over Brigantine, everywhere north of that town experienced the strongest part of the storm. The strongest winds, the largest waves, the highest storm surge, etc. Everything was worse north of Brigantine than what hit south of that point. 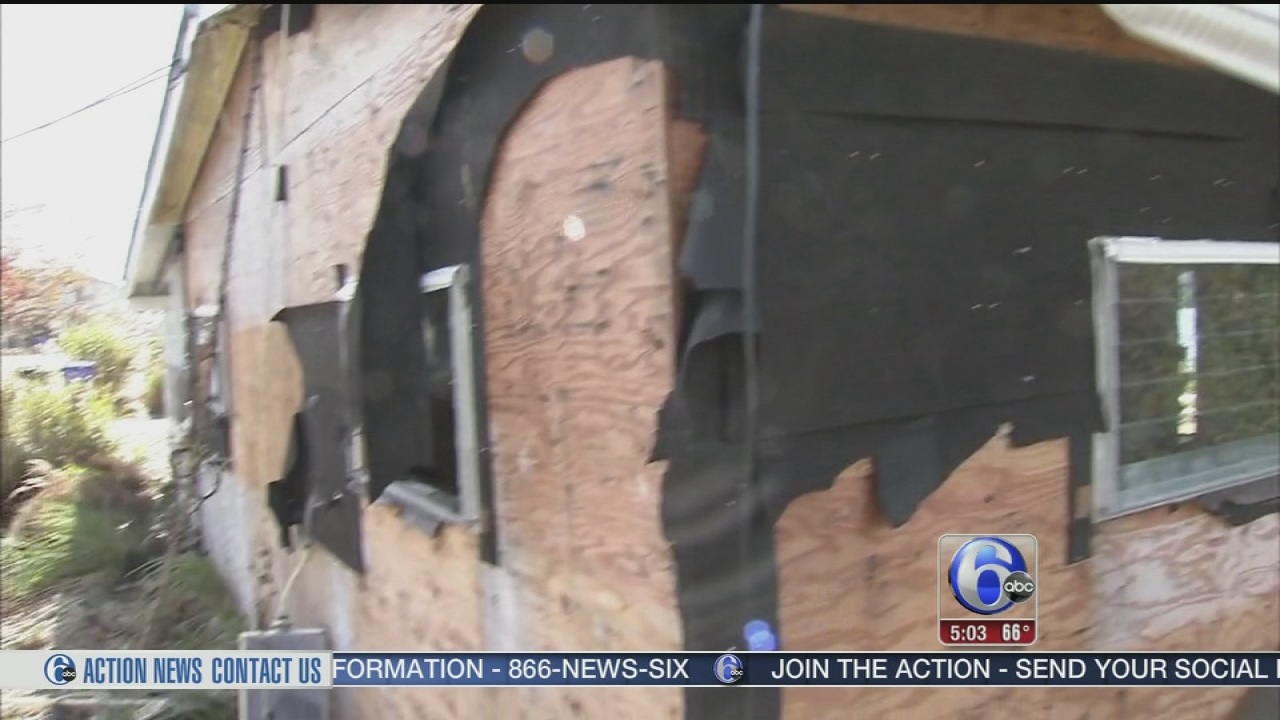 VIDEO: Rebuilding after Sandy
The rebuilding continues down at the Jersey Shore three years after Superstorm Sandy hit.

After the storm hit I went down to Gandys Beach on the Delaware Bay to survey the damage. It was unlike anything I had ever seen. There was so much sand that had washed inland from the storm surge that backhoes had to come in and clear the streets almost the same way a plow removes snow.

The sand was piled up as high as eight feet on the side of the roads. Every single waterfront property experienced some sort of damage. There were at least three homes half floating on the water with two others missing multiple walls.

One house didn't even have a floor anymore. 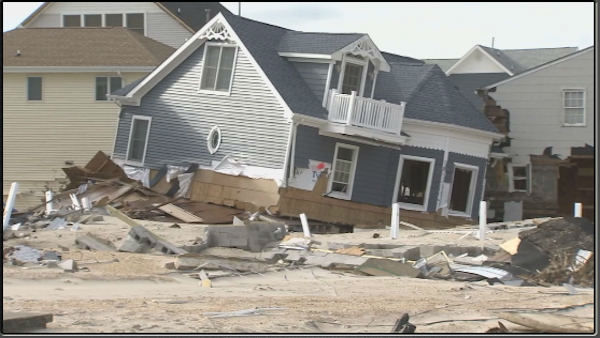 The seawall gave way and most of the road on the south end was gone. Many residents found sand on the second floor of their homes which were already on six to eight foot stilts to begin with.

This would mean the storm surge and wave action combined at some point was as high as 15 feet above normal. The marina was destroyed. Boats were upside down in the middle of the marsh. Sheds were found hundreds of feet away, laying on the main road heading in to this small community which sits well off the main strip.

It literally looked like a bomb had hit this small town.

Three years later and folks are getting back on their feet. But there are still little reminders everywhere from this devastating event.
Related topics:
weathersuperstorm sandyweather6abc weather blog
Copyright © 2020 WPVI-TV. All Rights Reserved.
More Videos
From CNN Newsource affiliates
TOP STORIES