What effect Hurricane Florence will have on Philadelphia 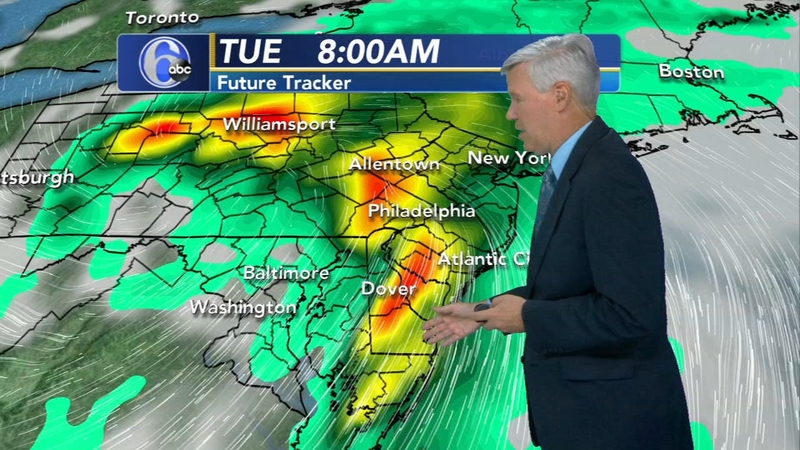 PHILADELPHIA (WPVI) -- As Hurricane Florence bears down hundreds of miles south of the Delaware Valley, the effects are already being felt at the Jersey shore. By Tuesday, the entire Philadelphia area will probably be picking up remnant moisture from what will be left of Florence, bringing some rain to the region.

High surf at Jersey shore due to Florence. Katherine Scott reports during Action News at Noon on September 14, 2018.

Downpours wouldn't be out of the question Monday night into Tuesday, depending on the track of the front and how much moisture can work its way in our direction.

One to three inches of rain is possible, with areas north and west of I-95 having the best chance to see the higher amounts. The high for Tuesday is 81.

With the ground still fairly saturated, it wouldn't take much to see some flooding from any significant rain, so this is a situation that deserves watching.

Residents should stay informed, especially those who live, work or travel through flood-prone areas.

By Wednesday, an early shower is possible in the Delaware Valley, but sunshine returns.

Southern Delaware could see some showers on Friday due to the outer bands of Hurricane Florence.

The waves have been already been pounding New Jersey's coastline.

In Atlantic City, the Beach Patrol is warning beachgoers to be on alert throughout the weekend, with rough surf and dangerous rip currents expected.

"With the energy from this storm still being present in the ocean, there will be rip currents," Vince Granese of the Atlantic City Beach Patrol said.

Ocean Resort Casino in Atlantic City has opened their doors to evacuees, providing a free place to stay to ride out the storm.

Free rooms for Hurricane Florence evacuees as reported by Maggie Kent during Action News at 11 on September 13, 2018.

Kelly Stull and her dog Scarlett have made a hotel room their home base after evacuating from Fairmount, North Carolina.

"I could be losing pretty much all my childhood memories; everything I've ever owned is down there," Stull said.