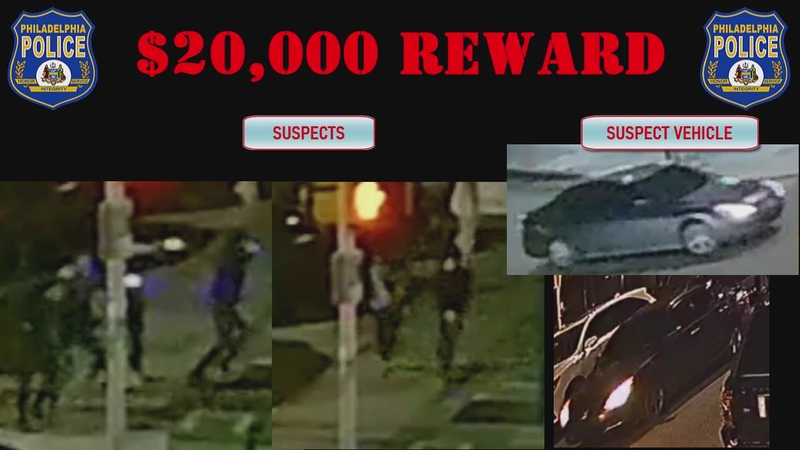 PHILADELPHIA (WPVI) -- Philadelphia police are asking the public for help in identifying four people wanted in connection with a deadly shooting at a Fourth of July barbecue.

According to police, four people, all armed with semi-automatic handguns, fired more than 100 shots at a crowd of people at about 10:30 p.m. Sunday.

Witnesses said, at first, they mistook the gunshots at 60th and Sansom streets for fireworks. Then they started to run.

After the shooting, the suspects are seen getting into a dark grey sedan, possibly a Nissan, with tinted windows. The car headed westbound on Walnut Street toward 61st Street.

The 23-year-old owner of a West Philadelphia clothing store and his friend were killed during a cookout where more than 100 shots were fired, police say.

One of the victims has been identified as 23-year-old Sircarr Johnson Jr., the owner of Premiere Bande, a clothing store in West Philadelphia.

Johnson had invited the community to an Independence Day barbecue, which was also an anniversary party for his store.

Salahaldin Mahmoud, 21, and a friend of Johnson's, was also shot and pronounced dead at the scene.

According to police, a 16-year-old girl and a 36-year-old woman sustained non-life-threatening injuries during the shooting.

Anyone with information about the suspects or the shooting is asked to call police.

A $20,000 reward is being offered for information leading to an arrest and conviction in this case.