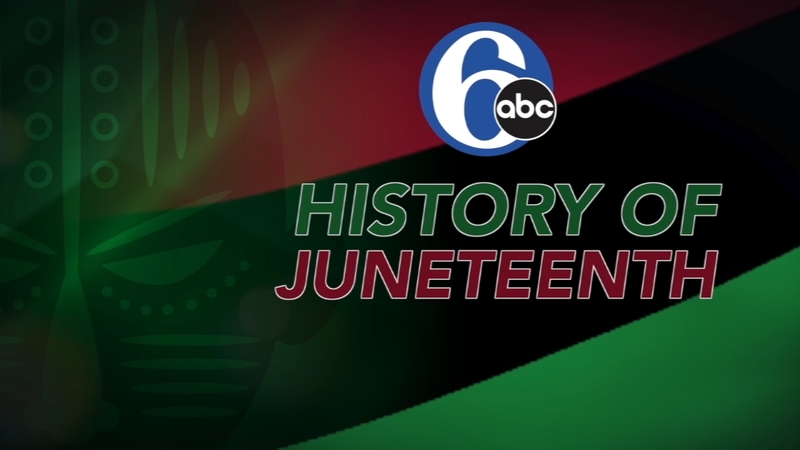 PHILADELPHIA (WPVI) -- Though Tuesday is Juneteenth, the oldest celebration of the emancipation of slavery in America, Philadelphia is planning to celebrate the whole week.

"Juneteenth is a celebration of the freedom of the African people who were captured and brought into America," Kenny Gamble, founder of Universal Companies and Philadelphia Community of Leaders, said.

The holiday dates to June 19, 1865, when the Union soldiers, led by Major General Gordon Granger, came to Galveston, Texas to tell the enslaved that President Abraham Lincoln had freed them. This took place a full two years after the Emancipation Proclamation went into effect.

Some accounts place the delay on a messenger who was murdered on his way to Galveston with the news. Others say the news was deliberately withheld.

The anniversary of June 19 continued to be revered in Texas decades later, with many former slaves and descendants making a pilgrimage back to Galveston on that date.

Texas declared Juneteenth a state holiday on Jan. 1, 1980, and today many states recognize or observe Juneteenth as a holiday.

President Donald Trump issued a statement on the holiday, saying: "As a Nation, we vow to never forget the millions of African Americans who suffered the evils of slavery. Together, we honor the unbreakable spirit and countless contributions of generations of African Americans to the story of American greatness. Today and every day, we recommit ourselves to defending the self-evident truth, boldly declared by our Founding Fathers, that all people are created equal."

"Juneteenth today celebrates African American freedom and achievement, while encouraging continuous self-development and respect for all cultures. As it takes on a more national, symbolic and even global perspective, the events of 1865 in Texas are not forgotten, for all of the roots tie back to this fertile soil from which a national day of pride is growing," Juneteenth.com says.

On Friday, the Honoring the Ancestors Ceremony is being held at Philadelphia's Independence Mall from 5:30 p.m. to 7:30 p.m.

On Saturday, the 3rd annual Juneteenth Parade will kick off at 15th Street and JFK Boulevard at Noon. Thousands are expected as dozens of floats, musicians, and community organizations will march down Market Street to commemorate the holiday. The parade runs until 2 p.m.

The Juneteenth Market Place and Festival will be held at Penn's Landing from 1 p.m. to 8 p.m.

"So just like they have Puerto Rican Day Parade, St. Patrick's Day Parade, and all of these different parades to celebrate culture and history, we decided to develop the Juneteenth annual parade and festival," Gamble said.

You can watch the Juneteenth Parade highlights on Sunday at 1 p.m. on 6abc hosted by Rick Williams and Tamala Edwards.

The event celebrates June 19th, the day the last enslaved African Americans were notified of the end of slavery in the U.S.