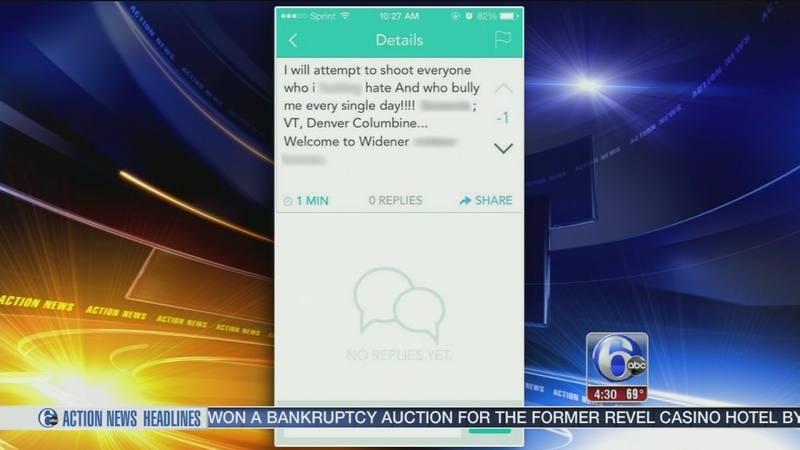 CHESTER, Pa. (WPVI) -- A 20-year-old freshman at Widener University is in custody after a threat against the school was posted to social media.

Vela will be charged with making terroristic threats and unlawful use of a computer.

This comes just hours after Widener University warned students about that threat.

In a notification sent on Tuesday morning, the university said the threatening message was posted to Yik Yak.

Yik Yak is used for the purpose of posting anonymous messages.

Vela allegedly posted a message saying he was going to attempt to shoot everyone they hate and who "bully me every single day."

The message also appeared to reference the locations of mass shootings, including Columbine High School.

"Someone took a screenshot of it. It was really scary because it referenced massive school shootings," said Audrey Rucker.

The district attorney's office put a team of forensic analysts to work immediately. They traced the IP address to an on-campus computer linked to a student's cell phone. That student, who police identify as Vela, was removed from class and placed in custody.

"After we pressed the issue with him, after we had him in custody, he broke down and confessed he was the one that posted the threatening message to the university population," said Delaware County DA Jack Whelan.

Yik Yak touts itself as a social media platform allowing users to make anonymous comments that can only be seen by others within a 1.5 mile radius, making it popular with college students.

Authorities said today's incident is a good reminder that just about anything on the internet can be traced.

"This is very serious business now. If you make a threat to an institution - to an individual even- we are going to respond rapidly," Whelan said.

"Everybody in our generation knows nothing is anonymous. I don't really know what the kid was thinking," said Kyle Schreiber.

The campus was never put on lock down and classes went on as scheduled all day.