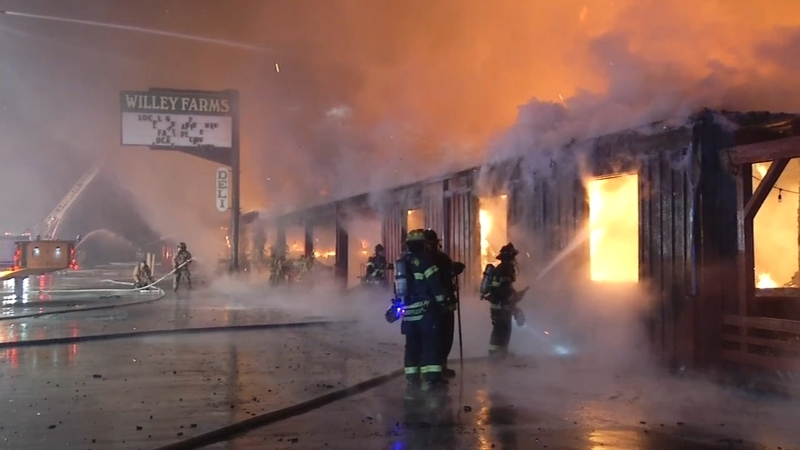 TOWNSEND, Del. (WPVI) -- A multi-alarm fire has destroyed a popular farmers market that has been a landmark in Townsend, New Castle County for more than four decades.

On Facebook, the owners of the 60,000 square feet market posted, "Willey Farms is gone."

The fire broke out around 2 a.m. Monday at Willey Farms on the 4000 block of Dupont Parkway. The blaze reached at least four alarms.

Approximately 150 to 200 firefighters responded to the scene, mostly volunteers, and some coming from 45 minutes away to help battle the fire.

Because Willey Farms is located in a rural area, there was no nearby water supply for the firefighters to use, so water tanks had to be brought in to help.

Firefighters worried about combustible materials in the building, like propane tanks, which also made battling the fire more challenging. The fire was so intense, firefighters had to evacuate the building for fear it might collapse.

Eventually, the roof did collapse, as firefighters got the upper hand on the flames. They continued to work to put out hotspots as the sun began to rise.

The origins of Willey Farms began in 1975 with Donald and Irene Willey. It has been passed down generation to generation.

The couple's daughter Eileen and grandson Richard were among those at the fire scene trying to cope with the loss.

"My mom woke up and she screamed, 'Willey's is on fire.' Me and my dad rushed down here," Richard said.

Eileen said her father built the farmers market for his six kids.

"We lost our dad 21 years ago. My mom passed away last year, Oct.12. This is like another death," Eileen said.

The Willey Farms Facebook message broke the news to its legion of loyal customers: "Hi Guys. We're all safe. The firefighters tried to save her. They worked real hard. But Willey Farms is gone. From the deli thru to the greenhouse. Produce. Natural Foods. Home Accents. She's all gone. We don't know where to start really. Kinda numb right now. It will be lots of hard heartbreaking work. But she will be built again. We do know that. Thank you for reaching out to us. Thank you for being our customers and friends for 43 years. Thank you so much. Thank you for your continued prayers and thoughts."

Fire trucks could be seen lined up on Route 13 to assist with the massive inferno. Two firefighers were taken to the hospital: one for a cardiac issue and one for smoke inhalation. Both are expected to be okay.

"Willey Farms has always prided themselves in just supporting local responders and the military. We've just always been a patriotic company," Richard said.

People have been sharing their memories of visiting Willey Farms through the decades on social media. Despite this horrible setback for the renowned farmers market, the Willey family says they are ready to rebuild.

State fire investigators are searching for the fire's origin and cause.

The building did not have sprinklers because it was built before such requirements became law and was grandfathered in.