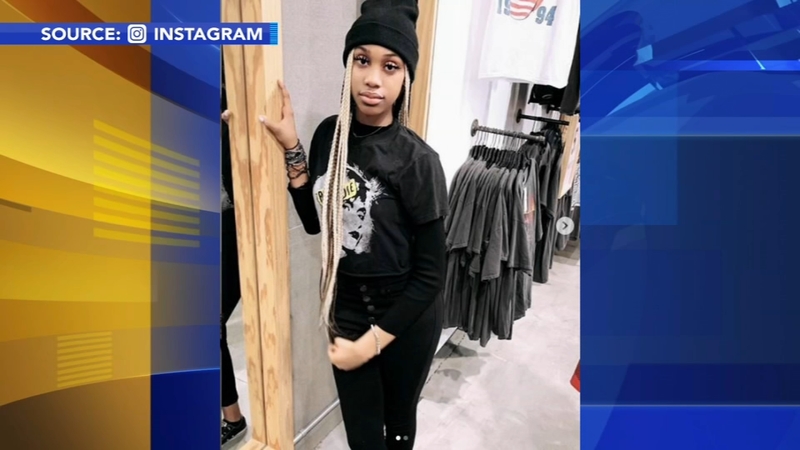 NEW CASTLE, Delaware (WPVI) -- More than 100 family members and friends gathered for a vigil Friday night to remember a William Penn High School student who was killed in a crash.

Sixteen-year-old Jordan Tate was a member of the ROTC for three years. She was a Sr. Airman who earned ribbons for good conduct, community service, 'dress and appearance', and longevity.

"I wouldn't think I would sit here and say goodbye to my friend I've known for so long. I'd never think I'd see the day she wouldn't be here with me," said Aki Newman.

Michelle Robinson-Patrick spoke to reporters before the vigil and said she witnessed the Thursday afternoon crash and ran to help.

"I tried to help all three of those girls. I'll never forget hearing the girl in the back because her legs were trapped," said Robinson-Patrick.

"The principal said that she had an infectious smile," school district spokesperson Lauren Wilson said.

Wilson continued, "She was a very popular young girl at William Penn."

Wilson said Tate had siblings who also are in the district.

"So this is an incident that is not only affecting William Penn, but it is affecting our entire district," Wilson said.

The accident Thursday afternoon also involved a bus with Eisenberg Elementary School students on board.

On Friday morning, crews replaced a broken street sign at the intersection of Memorial and Karlyn drives where the collision occurred around 3:40 p.m. Thursday.

"Right now, our Victims Services Unit is out with the family and has provided support for the family," explained New Castle County Police Master Corporal Michael Eckerd.

Investigators are still trying to determine what caused this crash.

A teenager is dead and several others are injured as reported by Maggie Kent during Action News at 11 on January 9, 2020.

The school bus had just left Eisenberg Elementary and was making its afternoon rounds, There were 20 children on board when the bus collided with the car, which was carrying four 16-year-old William Penn students including Tate.

Witnesses, like Terri Wheeler, saw the bus driver keep the children back.

"I talked to 911 and told them where it was at," Wheeler said. "The bus driver made them stay towards the back of the bus. I believe they were more scared than anything."

The children on the bus were not physically harmed, according to the school district.

But in the car, it was a different story.

Tate, who was driving, was pronounced dead at the scene.

"Administrators and teachers say that this young girl was just at the turning point of maturing, and they saw her potential. She will be deeply, deeply missed," Wilson emphasized.

Another 16-year-old passenger was airlifted to the hospital with life-threatening injuries.

Two other teens were taken to the hospital and are stable.

Investigators haven't said how Delaware's 'Graduated License Law' factors into the investigation, and whether there were too many teens in the car.

"It depends on the status of your license and that again is also part of the investigation," Eckerd said.