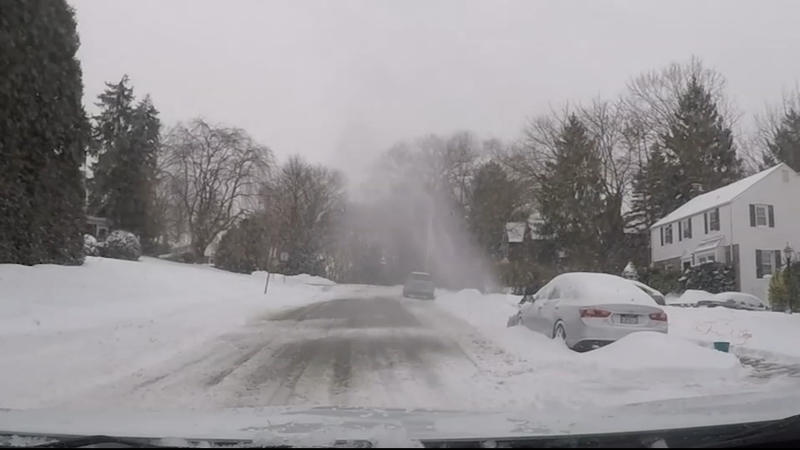 WILLOW GROVE, Pennsylvania (WPVI) -- As parts of heavy-hit Montgomery County dig out from the snow, officials warned that roads could get icy as temperatures dropped Thursday night and into Friday morning.

"There will be black ice out there until we salt," said Ken Hellendall, emergency management coordinator for Cheltenham Township. "If (you) don't have to go out, please don't go out."

Snow started early Thursday morning, and by the time the storm and its mixture of rain and freezing rain moved out of the area, a large swath of Montgomery County had racked up totals well over a half foot. Norristown and Abington both received 10 inches of snow.

Sisters Breanna and Celetha Hall spent the afternoon shoveling the sidewalk in front of their home in Norristown. The recent transplants from North Carolina listened to music blaring from their doorstep to keep themselves upbeat over the third snowfall in as many weeks.

"It's like somebody laid on the snow button and they just didn't wake up," said Celetha Hall.

In Elkins Park, residents spent hours with snowblowers and shovels, digging out and clearing off their cars.

Damian Mozeleski, 7, said he came out to play on this day off from school, but decided to help clear his parents' car instead.

His mom is grateful but would rather he be at school.

"I like it. I'm from upstate New York so it feels like home for me," one resident said.

"We just started hybrid school. All kids back in person a week ago and another snow day. (I'm) tired of it," said Jen Mozeleski.

The timing of the storm kept roads mainly traffic-free throughout the day, which enabled snowplows to clear the roads more quickly.

Hellendall said the freezing rain that fell has created slick conditions on roads and that his crews will be salting all roads in the township by the end of the night.

Meanwhile, as the Hall sisters continue to dig out, they dream about their next move.