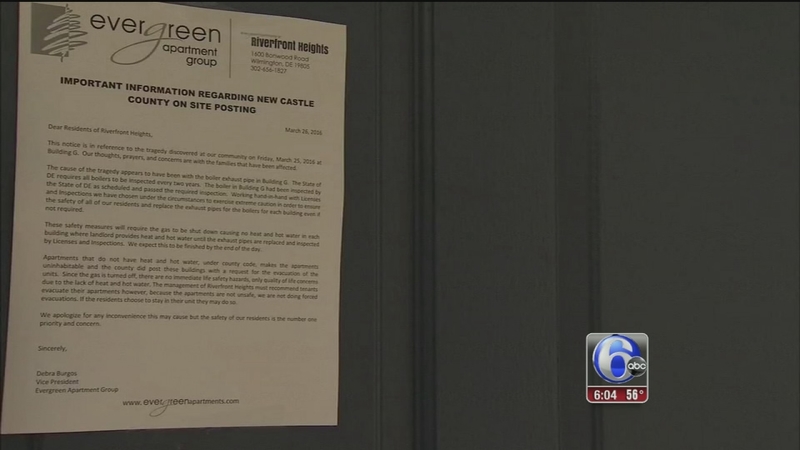 WILMINGTON, Del. (WPVI) -- Owners of an apartment complex in Wilmington say a faulty boiler exhaust pipe is to blame for the deaths of four people and a dog after a carbon monoxide leak.

Flyers were posted on the doors of seven other buildings in the complex Saturday, notifying residents of the cause of the tragedy. The flyer also states that boiler recently passed the required state inspection.

Residents in all but H bldg allowed back inside. H bldg closed until at least Monday for boiler repairs. Residents being offered hotel rooms

Residents in all, but one of the buildings have been cleared to go back inside. Building H will be closed for repairs until at least Monday, according to emergency management.

Action News has also learned the apartment management did purchase carbon monoxide detectors for all of the buildings on Saturday.

Police and fire crews responded around 5 p.m. Friday to Evergreen Apartments at Riverfront Heights located in the 500 block of Homestead Road.

There, rescuers found the four victims. They have been identified as 60-year-old Carl Dunfee, 58-year-old Veronica Mousely, 72-year-old Andrew Spanakos and 56-year-old Nancy Uniacke. They are all from building G. 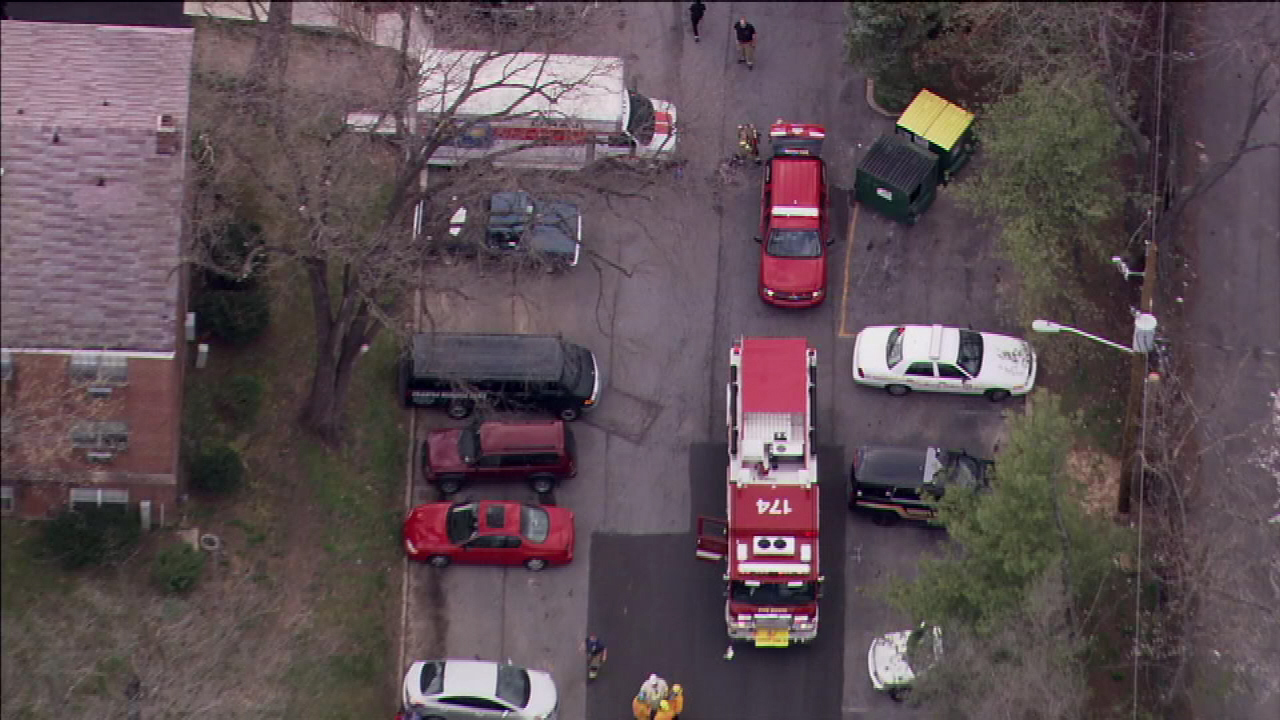 PHOTOS: CO incident at Wilmington apartments
Chopper 6 was over the scene of a carbon monoxide incident in Wilmington, Delaware.

Nancy Uniacke's family spent Satursday moving boxes of out of her apartment in building G, including her prized "Wizard of Oz" collection.

"In my phone she's Dorothy Gale of Kansas. That's my nickname for her," said Martin Uniacke, victim's brother. "She was very proud that her collection was in the paper locally here."

"She loved everyone. She was the person who would say hello to you if you were in the market," said Brian Uniacke, victim's brother.

Neighbors say they often saw Spanakos walking his dog around the complex.

"Wherever he went, the dog went," said Jalil Dorsey, neighbor. "They'd ride around. He got in the car, the dog would hop in the car with him."

Edward Dunfee says he got worried when his brother stopped answering his phone.

"My mother and all of us have been trying to call him for two days," said Edward Dunfee, victim's brother. "So I come here three times a day, then I went to the office to make a courtesy call."

Edward Dunfee says when he couldn't get into the apartment, the management office called police. He says his brother, his girlfriend and another friend were found dead along with a dog.

Police and firefighters responded to the scene of a carbon monoxide incident in Wilmington, Del.

Emergency crews found high levels of carbon monoxide inside the complex, prompting the evacuation of residents in buildings F and G.

A fourth victim was found inside a second unit, police say.

Eight other residents, including three children, were hospitalized.

"That explains why I was dizzy when I was walking to the bus stop," said Deja Goldsberry, neighbor. "I had to actually sit down because my head was pounding. I didn't know what it came from."

Police and firefighters responded to the scene of a carbon monoxide incident in Wilmington, Del.

Goldsberry is six months pregnant, and was released from the hospital Satursday morning.

"The paramedics came to my job and checked me, and my levels were up to like a 10," said Goldsberry. "They had to take me to the hospital and get me all checked out."

An official cause of death has not been ruled, but police say emergency crews found high levels of carbon monoxide when they responded Friday night.

Police say autopsies need be done on the victims before they can release more information as early as next week.