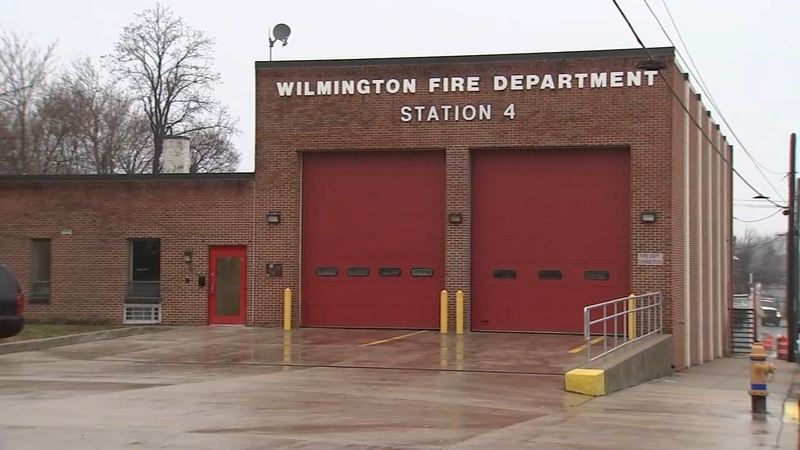 WILMINGTON, Delaware (WPVI) -- After more than three years of back-and-forth offers and negotiations, the battle over a contract between firefighters and the City of Wilmington has come to a head.

The disagreement has been through phases of negotiation and mediation. Now, both sides are engaged in their final option: binding arbitration.

"We've been without a contract since June 2016," said Joe Leonetti, Jr., president of Wilmington Firefighters Association Local 1590. His union represents the city's firefighters.
"We're the only city employee that doesn't get time and a half overtime. We're the only city employee that gives hours back and don't get compensated for them," he said.

But firefighters say the 72 hours are what they need to rest.

"This is a taxing job mentally and physically, so those 72 hours give us a day to decompress, be with our families," said Leonetti, Jr., adding that some firefighters also need the time to work and make extra money for their families.

The deficit causes a need for what's known as rolling bypasses. In that practice, the city closes a fire station for a day.

"If we were to fully staff the department so we did not have to do rolling bypass, it would be another million to million and a half dollars," the mayor said.

"We lost three members in September 2016. The closest engine company, which was less than a mile away, was shut down that night," said Leonetti, Jr.

The new proposed shift equates to firefighters working about 13 extra days per year.

They say they're willing to compromise if the city stops rolling bypasses and doesn't lay off any firefighters.

"Rolling bypasses and no layoffs is our line in the sand," said Leonetti, Jr.

Mayor Purzycki says the city has heard that message in earnest.

"We have no interest in laying people off," he said. "I promised the union that, on an institutionalized regular basis, we will not have rolling bypass."

After three years, both sides want to get a deal done. But perhaps no one wants it more than the residents who are caught in the middle.

"We need to know there's enough fireman and enough equipment to save lives," said Rosalind Bailey of Wilmington.

The next step is for an independent arbitrator to look at both offers and decide whether to accept the firefighters' union offer or the city's offer. Both sides would be required to comply with the arbitrator's decision.
Report a correction or typo
Related topics:
societywilmingtonsocietyfirefightersjobs
Copyright © 2022 WPVI-TV. All Rights Reserved.
TOP STORIES
5 hospitalized after car crashes into utility pole in Montco
After the omicron wave, what's next for the COVID pandemic?
Police investigate 2 deadly hit-and-run crashes in Philly
Car crash sends vehicle into side of home in Lawndale
CDC warns about counterfeit N95, KN95 masks
AccuWeather: Another Cold Morning
Car flips over guardrail, lands in woods in Haddon Township
Show More
Police: Man shot, killed in Philadelphia's East Falls section
All 100 lab monkeys accounted for after several escape crash
Montco health department ties 10 hepatitis A cases back to restaurant
Arnold Schwarzenegger involved in multi-vehicle crash
NYPD officer killed, suspect is from Allentown
More TOP STORIES News