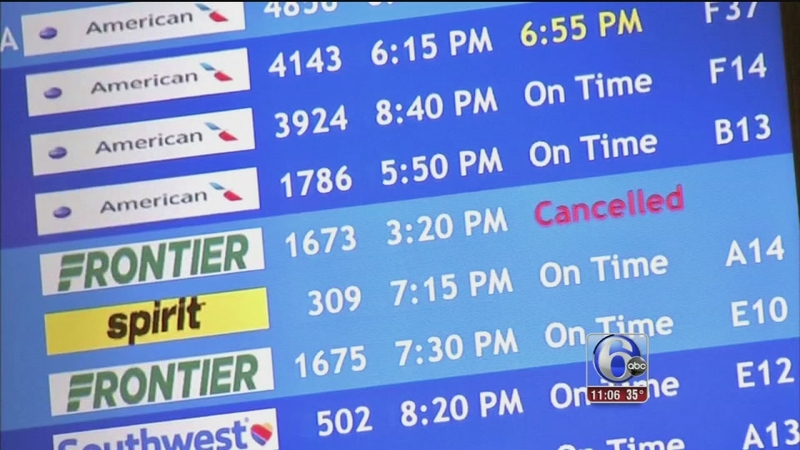 Some flights were delayed by more than two hours, while many others were cancelled.

After Frontier Airlines canceled a number of departing flights from Philadelphia International, things at the checkout gate got a little heated.

She and others we're all heading to Punta Gorda in Florida, but the flight was cancelled last minute. Customers say they were offered no solution until a flight on Tuesday.

One woman says they tried to speak with Frontier, but she didn't like one employee's response.

"He says you get what you pay for, and I don't think that was appropriate for an employee to say that to the people," said Jan Pierce, traveler.
But it wasn't just that flight.

Joseph Patterson says he was going to Orlando. It was cancelled, so he opted for a ticket with American Airlines.

"I had to buy a new ticket. They are going to put it back on my account, but it's like seven work days. But to get home you gotta do whatever it takes," said Patterson.

Jimmy Cobb was also flying Frontier to North Carolina. It was cancelled.

"The next flight is next Sunday. That's the best they can accommodate us," said Cobb.

Inclement weather has impacted more than 3,000 flights around the country.
In Denver, it seems Frontier was also having problems. One hundred bags were piled up with no Frontier employees to sort them.

Customers had to sort out the luggage themselves.

United Airlines in Denver was also having issues. Customers had to wait in a line dozens and dozens deep, with only one employee at the customer service desk.