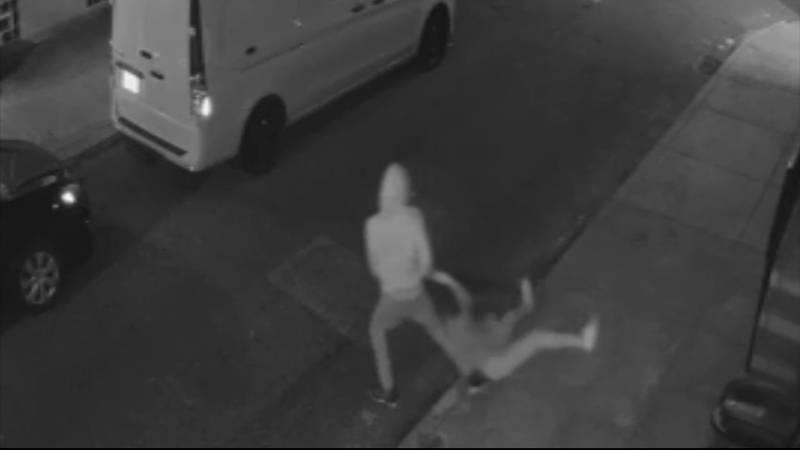 PHILADELPHIA (WPVI) -- Philadelphia police are looking for the suspect who was caught on video attacking a woman over the weekend.

It happened around 9 p.m. Saturday, March 27, when the victim was walking home near 17th and Carpenter streets.

The victim says she encountered a man checking multiple car doors on the block and decided to say something. That's when things turned violent.

Video shows a man in a gray hoodie throwing the victim up against a wall, punching her, and then dragging her down the pavement.

Chilling video of an attack in Grad Hospital. The victim says she was walking home when she encountered a man checking multiple car doors on Carpenter near 17th. Tired of the area crime, she spoke up, and it turned violent. South Detectives confirms its investigating @6abc https://t.co/qxJLF7ybBC pic.twitter.com/kM3C1o0QR3

The attacker fled after the victim's cries for help brought neighbors to their doors and diners to the street corner.

"Someone could say to me, 'Oh you asked for this. You brought this on yourself. That's what you get for saying something.' But at the same time I just got to the point where I'm tired of hearing about all this horrible stuff happening and seeing it happen," said the victim. "I figured for once, it's happening in front of my eyes, and I'm sick of it."

Police encourage residents to contact authorities when they see lawlessness.