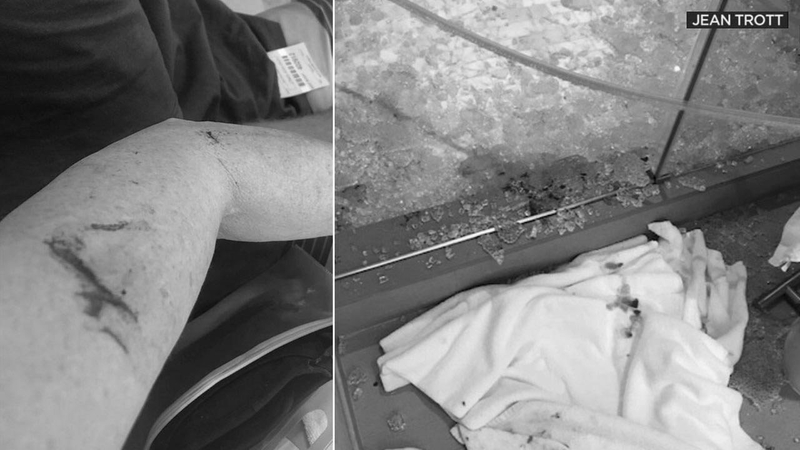 NEWPORT BEACH, Calif. -- A woman says she was injured when a shower door at a California hotel suddenly exploded.

White bandages were seen on Jean Trott's arms and foot to cover the wounds suffered in her hotel bathroom at the Hyatt Regency John Wayne Airport.

"It was very loud. It was an instantaneous boom," Trott told our sister station KABC.

She said the "boom" was the glass door exploding while getting out of the shower, sending shards of glass flying.

"I was bleeding pretty profusely and so I'm thinking, 'I have to get to the hospital quickly,'" she recalled.

Trott said it took several hours for medical staff to remove the shards of glass. She required 30 stitches.

The yoga instructor, who was visiting Newport Beach from Raleigh, North Carolina, said that once back at the Hyatt Regency, hotel staff got her family another room and regularly checked on her.

"They were shocked, they had no idea something like this could happen," Trott said.

The commission said in a statement: "The spontaneous breakage can be caused by scratches, installation error or other factors because the surface of tempered glass is under pressure."

What caused the door to suddenly shatter is not known. In a statement, the general manager of the hotel said as soon as they learned of the incident, they immediately contacted the shower door manufacturer.

The statement goes on to say they're "conducting a thorough investigation on the product in all of our guestrooms, in an effort to determine the cause and prevent another incident from occurring in the future."

Trott said she would not get into another glass shower, and she plans to have safety film installed on her shower doors at home.

"It can still explode, but that will retain the glass and hold it together," she explained.

Trott, who is in California for a yoga retreat, is now uncertain how active she can be. She said she's worried about scarring and possible nerve damage to her foot.