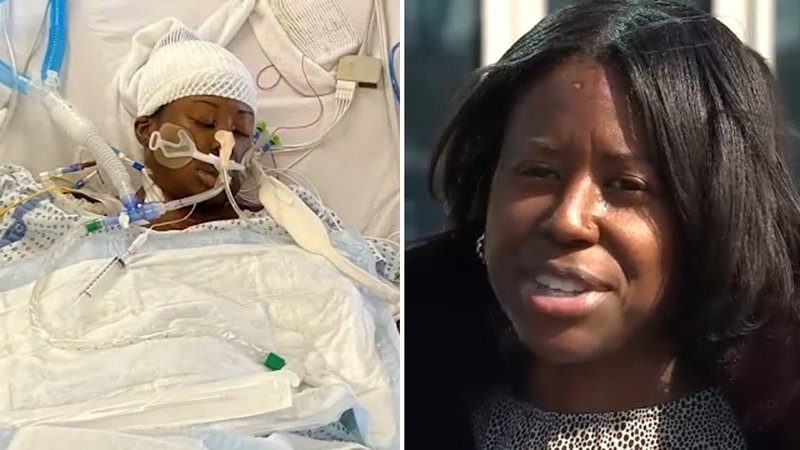 NEW YORK -- A New York City woman reunited Thursday with the surgeon who performed a life-saving liver transplant after a near-death experience linked to a nose ring infection.

For 37-year-old Dana Smith, of Queens, a spontaneous decision to get a nose ring during a shopping trip last Thanksgiving resulted in a medical emergency that almost claimed her life.

Just a few days after that, Smith noticed that she wasn't feeling very well.

The busy mother of a teenager chalked it up to acid reflux and the stress of the upcoming Christmas holiday, but as days turned into weeks, she could no longer tolerate food or water.

"I was just drinking water, I couldn't hold the water down," she said. "I guess at some point I started to throw up blood."

"The happiness in my heart is indescribable," her father said.

Finally, on Jan. 12, she asked her sister to bring her to Long Island Jewish Medical Center. At this point, she said she was so sick that she can't remember the events that followed.

She said she remembers one ultrasound at the hospital, then waking up to her doctors telling her she had a new liver.

"That one decision saved my life," Smith said. "It's very overwhelming. Emotionally, everything, mentally."

Tests had revealed that Smith was suffering from fulminant Hepatitis B, a very rare condition in which the patient is sent into immediate liver failure.

Smith was then brought to North Shore University Hospital, where she came under the care of Dr. Lewis Teperman, director of Northwell's Transplant Services.

The brain swelling that results from Hepatitis B caused seizures, so it was decided that Smith should be placed in a medically induced coma.

She was placed on the transplant list immediately, and a match was discovered within 48 hours, enabling her transplant surgery to take place on January 17.

She was able to return home on January 26.

The mystery of what caused the otherwise healthy young woman to become so seriously ill was solved when doctors removed Smith's mask to discover the small, studded nose ring.

By ruling out all other variables, the medical team determined that the illness was an infection from that nose ring that resulted in fulminant Hepatitis B, and more importantly, she waited too long to seek medical attention.

"This was the one unique change that had taken place in her life, this nose ring, Dr. Teperman said. "And it's the perfect time for the virus to incubate."

Smith, who has not yet returned to work, wants to share her story in the hope of encouraging people to monitor their health closely and not avoid coming to the hospital for fear of COVID-19.

Had she waited even one or two more days to visit the emergency room, her story could have ended much differently.