US misses World Cup for 1st time since 1986 with loss 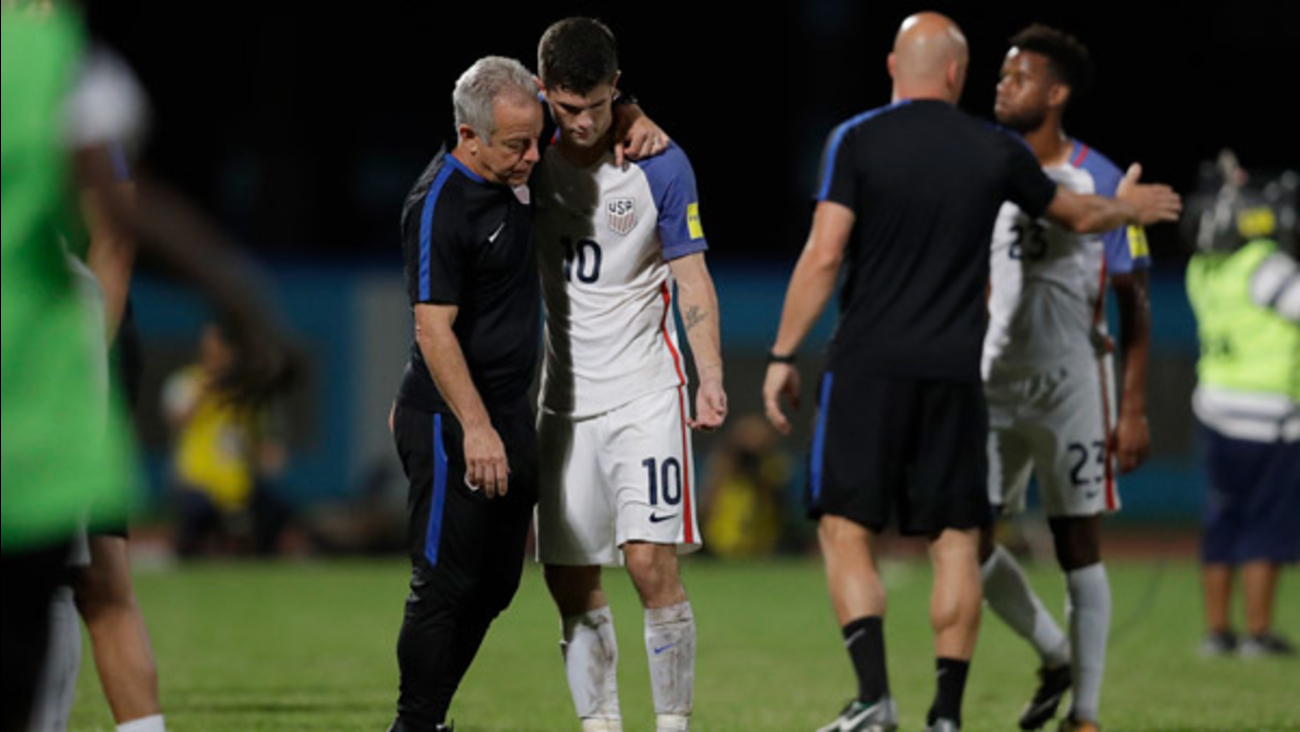 COUVA, Trinidad -- Twenty-eight years after the United States ended a four-decade World Cup absence with a stunning victory at Trinidad, the Americans' chances for the 2018 tournament in Russia ended on this island nation off the coast of Venezuela in even more astonishing fashion.

Needing only a tie and confident of victory against the world's 99th-ranked team, the U.S. was eliminated from World Cup contention Tuesday night with a 2-1 loss to Trinidad and Tobago that ended a run of seven straight American appearances at soccer's showcase.

"We let down an entire nation today," said defender Omar Gonzalez, whose 17th-minute own goal started the collapse.

Gonzalez casually tried to clear Alvin Jones' cross and sent it looping from 15 yards over the outstretched right arm of Tim Howard. Jones doubled the deal in the 37th minute with a 35-yard strike.

Clint Dempsey, at 34 trying to make it to a fourth World Cup, entered at the start of the second half and was denied by goalkeeper Adrian Foncette's leaping save in the 69th and hit a post from 22 yards in the 77th. Bobby Wood's header in the 88th was sent wide by Foncette.

Even a defeat could have earned a berth, but only if Panama and Honduras both lost. And if the U.S. and only one of those rivals were beaten, the Americans would have finished fourth and advanced to a playoff next month against Australia.

Panama trailed 1-0 to Costa Rica at halftime and Honduras was behind 2-1 to Mexico, but both rallied against nations that already had clinched berths. Gabriel Torres scored for Panama in the 52nd minute on a shot that did not appear to cross the goal line, and Honduras went ahead on Guillermo Ochoa's own goal in the 54th and Romell Quioto's goal in the 60th.

At that point, the 28th-ranked Americans were playoff bound, but Roman Torres scored in the 88th minute to give Panama a 2-1 win, a third-place finish with 13 points and its first World Cup berth. Honduras finished fourth on goal difference and goes to the playoff.

The Americans, who would have qualified with 13 points because of a superior goal difference, instead had 12 points and finished fifth in the hexagonal.

"It's a blemish for us," coach Bruce Arena said. "We should not be staying home for this World Cup and I take the responsibility for that."

American players were not aware of the scores of the other games until after the final whistle.

"When I looked over at the bench and everyone was sitting down," Gonzalez said, "I could just see from the looks on their faces that it wasn't good."

Back in 1989, Trinidad needed merely a tie to reach its first World Cup, but Paul Caligiuri's long-range goal in the 30th minute put the U.S. in the tournament for the first time since 1950.

That game was played before a crowd of 35,000-plus at National Stadium in the capital of Port-of-Spain. With Trinidad already eliminated, this one drew a few hundred fans at Ato Boldon Stadium, 24 miles to the south.

The U.S. entered its final qualifier with a berth uncertain for the first time since 1989. Home losses to Mexico last November and Costa Rica caused the U.S. Soccer Federation to fire Jurgen Klinsmann and bring back Arena, the U.S. coach from 1998-2006. But after a loss to Costa Rica in New Jersey last month, there was little margin for error.

Shocked American players slumped on the bench, and center back Matt Besler sat on the field after the final whistle as Panama's game ended and then Costa Rica's. Dejected U.S. players filed into their locker rooms with blank looks.

"You can go around in circles a million times over again, but the reality is that it was all there for us and we have nobody to blame but ourselves," U.S. captain Michael Bradley said.

Arena, a 66-year-old member of the U.S. National Soccer Hall of Fame, agreed with his usual bluntness.

"We foolishly brought Trinidad into the game with the own goal," the coach said. "That was a big goal for Trinidad psychologically. That got them motivated."

Missing the World Cup is a devastating blow to the USSF, which has steadily built the sport in the last quarter-century with the help of sponsors and television partners. It also is a trauma for Fox, which broadcasts the next three World Cups after taking the U.S. rights from ESPN. The USSF hopes to co-host the 2026 tournament with Mexico and Canada, and Morocco is the only other bidder.

"Every time you have a setback you have to look at things, re-evaluate and get better," 38-year-old goalkeeper Tim Howard said. "And as a program we have to get better. This hex proved that. There's some good teams on the up and up and we've got our work cut out for us."

Arena left his lineup unchanged from Friday's 4-0 rout of Panama in Florida, but the Americans couldn't generate the needed energy and emotion.

"Our center backs were not confident enough with the ball and really often in the first half we were playing eight against 10 because they really need to carry the ball and bring a player to the ball and then move it a little quicker," he said. "Our forwards were not able to hold the ball. They did a poor job there. We didn't get Pulisic into the game. We played poorly. The first goal was unfortunate. Those things happen. The second goal was an incredible shot. What can you say?"

Gonzalez said Jones' cross struck his left shin as he tried to prevent it from reaching Shahdon Winchester.

"One of the most unlucky goals ever," Gonzalez said. "It is one that will haunt me forever. ... I never thought that I'd see this day. This is the worst day of my career."