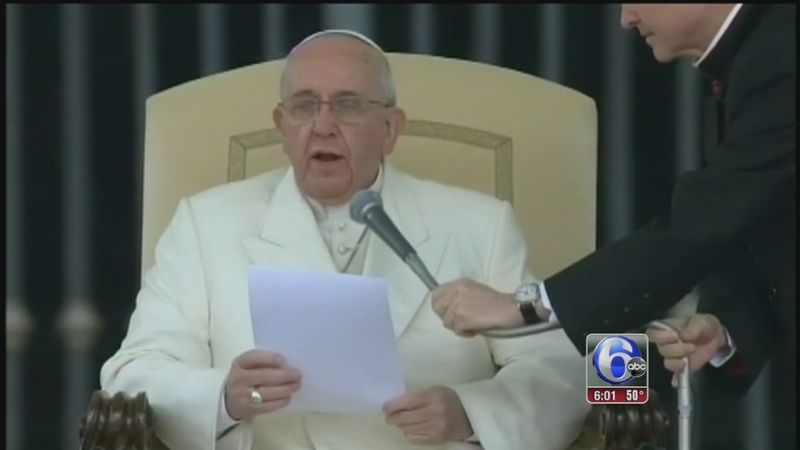 PHILADELPHIA (WPVI) -- It is official - Pope Francis is coming to Philadelphia! And local officials talked about some of the details of the papal visit at a news conference Monday morning.

Luckily, area leaders have been planning for the possibility that the pope would personally attend the World Meeting of Families in Philadelphia, for quite some time.

Back in March, Pope Francis told a delegation from Philadelphia that he would be coming. But, they were sworn to secrecy. That included Governor Tom Corbett and his wife, Susan.

Susan Corbett says, "It was there that the governor had the honor of inviting the pope to Philadelphia. And the Holy Father answered our invitation by whispering three words in Tom's ear: I will come."

The secret is out now.

The announcement was made at the Philadelphia Museum of Art, which will serve as the backdrop for the eyes of the world on the pope as he celebrates the first event on Saturday September 26, 2015, and then celebrates mass on Sunday September 27, 2015.

Among those bursting with pride is Mayor Michael Nutter, who is relishing the idea of the eyes of the world being on Philadelphia during the pope's visit.

At Monday's news conference Nutter said, "Philadelphia is, in fact, a world-class city. I'm looking forward to showcasing our culture and community with people from across America and around the world, and welcoming them to the most welcoming city in the United States of America - Philadelphia."

The World Meeting of Families will be a five day event, but Pope Francis will be here for the last two days.

There will be a Festival of Families, with concerts and entertainment on Saturday. Then Sunday the stage will be transformed to an altar, where the pope will celebrate mass in front of, perhaps, well over a million people.

It will be the biggest logistic and security challenge the city has ever faced.

Nutter explained the obstacles, saying, "How will people access the Parkway? What streets need to be shut down? How do we communicate with people? This is a massive undertaking. We'll do it and we'll do it well. But a significant amount of planning has to take place."

It will be expensive, but Nutter says he's hoping for state and federal funding and corporate giving. The organizers alone are raising $45 million for the event.

The visitors will pump a lot of money into the local economy as they fill restaurants and hotel rooms.

There won't be enough rooms to go around, so organizers are signing up host families.

The executive director of the event, Donna Crilley-Farrell, says, "There is a way for families within our region to sign up to be host families. Because without that we cannot accommodate all of our visitors coming from all over the world."