How not to panic about possibly meeting Pope Francis 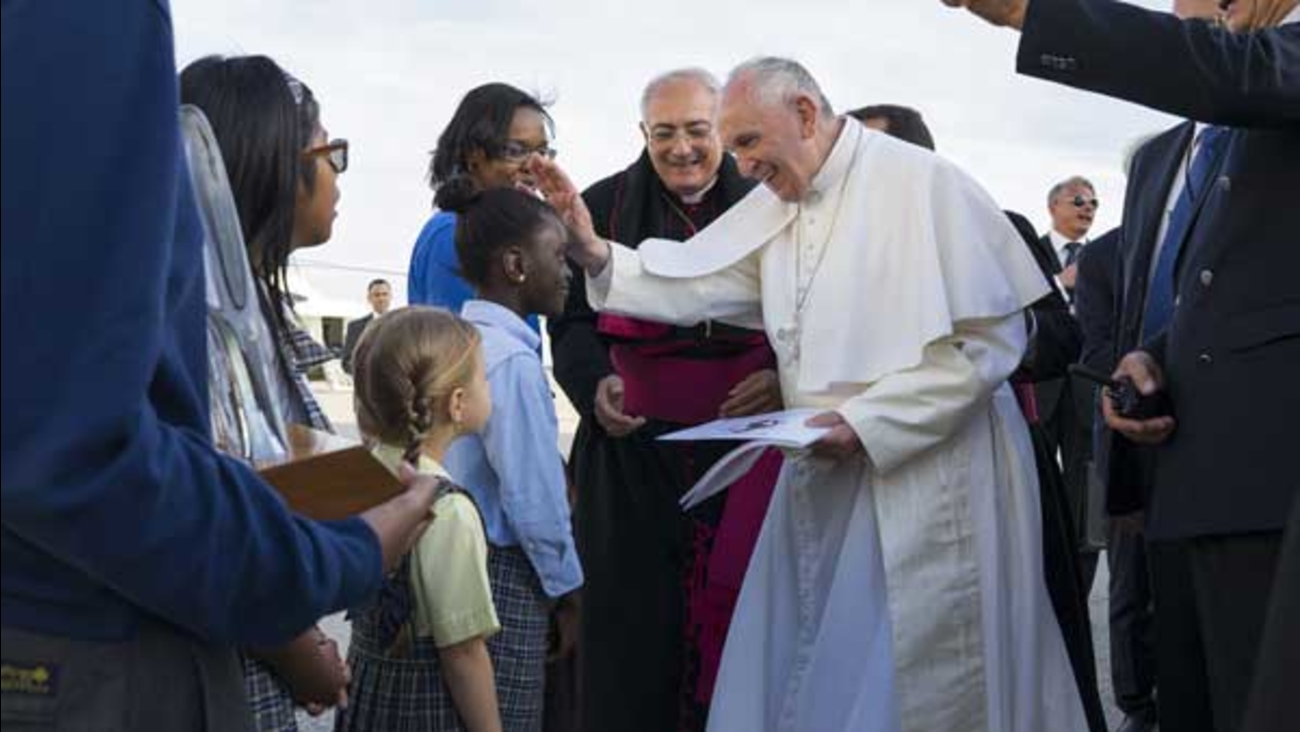 Pope Francis reaches out to 5th grader Omodele Ojo from Brooklyn, New York as he is greeted by children upon arrival at JFK Airport Thursday, Sept. 24, 2015, in New York. (AP Photo/Craig Ruttle, Pool)

NEW YORK -- The pope has arrived. What do we do? Hugs? Selfies? Curtsies? How formal should we be with a man who telephones average people out of the blue and accepts pizza deliveries in the popemobile?

Should we follow the advice of House and Senate leaders, who told lawmakers to avoid handshakes or conversations with Pope Francis as he entered the chamber for his speech in Congress on Thursday?

Here's some etiquette advice from a few experts skilled at being "in the wallpaper" of such VIP visits, the protocol officers who spend weeks or months planning every detail and know the taboos:

NO HUGGING THE POPE! OR NOT?

During the last papal visit to the United Nations in 2008, the instructions were clear: Don't hug Pope Benedict. During a receiving line for U.N. staffers, he even stosod on a six-inch platform to help keep him out of reach.

But that quickly failed. "The first person walked up on the platform and hugged him," says Alice Hecht, who was the U.N.'s chief of protocol at the time. In a previous papal visit, she says, someone even jumped onto the platform at the U.N. General Assembly for an embrace.

You try to create a zone of protection, Hecht says. "But of course, you never really know."

Larry Dunham, a former assistant chief of protocol at the State Department, says he personally would avoid hugging Pope Francis. "But I understand that people can be overcome in that kind of situation," he says. "I'd follow his lead."

BUT WHAT DO I SAY?

"If I were greeting the pope, I would probably keep him at an arm's distance," says Gary Biggs, a former protocol officer in the Defense Department. "I would wait for someone to introduce him, then address him as 'Your Holiness' or 'Holy Father.' If I were a practicing Catholic, probably if he extended his hand I'd make the act of kissing the ring. Some Catholics might get on one knee."

In a receiving line, Biggs says, he would discourage people from taking photos, asking for autographs, giving gifts or - certainly not! - offering business cards.

"It's not an opportunity to introduce yourself," he says.

HOW ABOUT A SELFIE?

"Selfies are awful. Cellphones are horrendous," says Leslie Lautenslager, a former assistant chief of protocol at the State Department. Smartphones are the latest headache in protocol because anything can be captured and shared within seconds.

At the very least, ask before trying a selfie with the pope, protocol officers say.

"It depends very much on the pope himself," Hecht says. "Maybe he will not mind."

NOTE TO EVENT PLANNERS: DON'T LET THIS HAPPEN TO YOU

More than two decades ago, Queen Elizabeth was on a state visit to the U.S. and was to speak on the White House South Lawn. But someone forgot to pull out a little step at the base of the lectern for her to stand on. They also forgot the height difference between the queen and the gangly first President Bush.

"Queen Elizabeth. Not tall. Guest of honor," Lautenslager says. "At the time, she was sweet about it and made light of it."

One can only imagine that the relatively freewheeling Pope Francis, as dignitaries go, would do the same.

So now that you know how to behave around Pope Francis, what are the odds you'll just happen to bump into him?