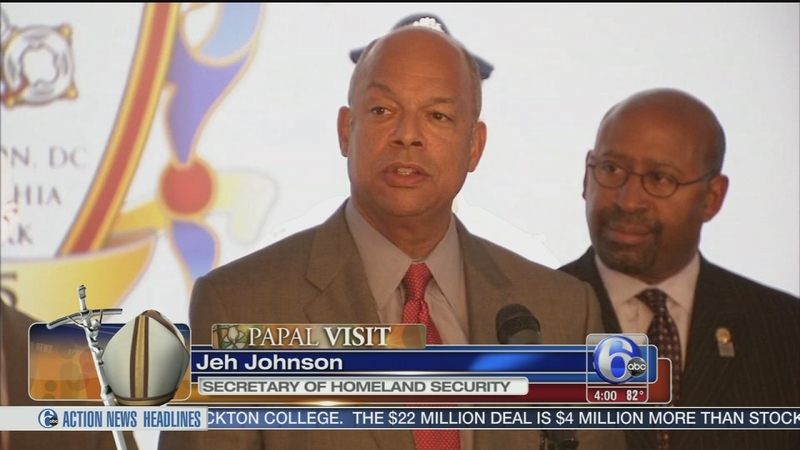 PHILADELPHIA (WPVI) -- The Secretary of Homeland Security and the head of the Secret Service visited Philadelphia Friday to review the papal security plan.

They say they are going to be focusing on the inner two security zones that we've seen on the maps of the Francis Festival grounds, as well as the venues where the pope will be along the Ben Franklin Parkway.

The city and the state, including the National Guard, will be focusing on the traffic box and beyond.

As for any potential threats, Secretary of Homeland Security Jeh Johnson says, "We know of no specific credible threat directed at the pope's visit here to this city. And so we fully anticipate a successful and safe visit for the pope and for the public."

In addition to the papal security plan, the Secretary of Homeland Security is in town to help in the roll out of the electronic clearing house that will serve more than 50 safety related agencies during the papal visit.

Officials said in terms of just sheer acreage, Philadelphia's restricted movement zones are the largest ever for a modern U.S. city.

The mayor downplayed the impact of the three square mile traffic box and disputed the school of thought that the limitations are just too much.

At a press conference Friday, Mayor Nutter said, "We know that that area downtown is three square miles out of 138 square miles in the City of Philadelphia. So again, I'll let them talk about other cities, but this idea that it's impossible to move around the city is just not correct."

The head of the U.S. Secret Service, Joe Clancy, also responded to those who feel the multi-day closing of streets, highways and the Ben Franklin Bridge is overkill.