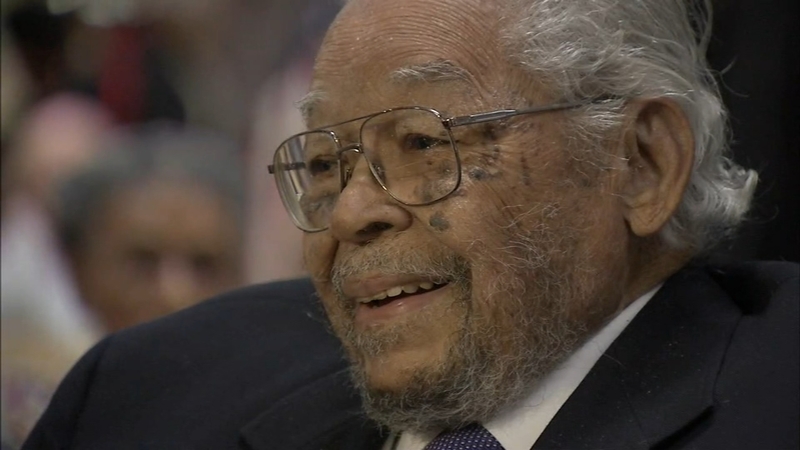 PHILADELPHIA (WPVI) -- Nelson Henry, Jr. waited 75 years for a pivotal moment. It was the moment that the Army designated his discharge as "honorable."

"I was in disbelief," said the 96-year-old veteran "I could not believe that it would happen."

Henry's recent honor was the focus of the Veterans Day Celebration at The Watermark residences in the Logan Square section of Philadelphia.

Decades ago, Henry was discharged after service during World War II, his discharge was classified as a so-called "blue discharge."

The discharge, which was delivered on blue paper, was later deemed a discriminatory practice that robbed thousands of African American and gay service members of military benefits since they were not honorably discharged.

"(The blue discharge) wasn't dishonorable and it wasn't honorable," Henry said of the discriminatory practice.

"It basically had the effect of being almost dishonorable because it would make it hard to get a job," said Henry's son Dean Henry who kept his father's records for decades in preparation for the day that the family would challenge the blue discharge.

Nelson Henry, Jr. would bring up the subject over the years. But in the past two years, the family's mission became more intense, garnering attention in newspaper articles and even from lawmakers. The case was expedited. And this summer, the family received the news that Henry's blue discharge would be revoked and he would, instead, be awarded an honorable discharge.

"He calls it a miracle," said Dean Henry.

With the new designation, Henry will now be eligible for veterans benefits. But he's already receive something even more precious: honor.