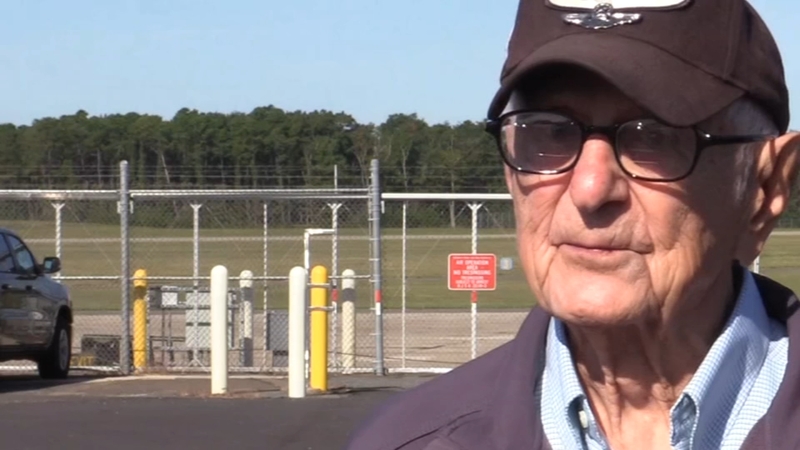 MILLVILLE, New Jersey (WPVI) -- Any photo you can find of Lt. Col. William Bonelli during World War II is black and white, but his memories are in color, and each detail is as loud as the engines of his old B-17.

"Let me point out I was too busy to be afraid or anything like that," he said.

Bonelli last flew his beloved B-17 in 1945. That's also the last time he stepped foot in one.

"To be honest with you, I wanted to forget. That's all I can say," Bonelli said.

Whatever changed for Bonelli brought him to Millville Airport where the staff greeted him on Friday with a medal and gave him a tour of the military museum.

Outside, the airport has several restored military aircrafts, including a B-17.

Bonelli toured the aircraft, inspecting every inch. Then, with his family, he climbed on board for his flight in about 75 years.

"To the American people, the most important thing I have to say is, 'Thank you, thank you, thank you. For your interest and your concern for your veterans, our veterans I should say,'" he said.
Report a correction or typo
Related topics:
hobbies & interestsmillvillenew jersey newshistoryworld war iiveteran
Copyright © 2022 WPVI-TV. All Rights Reserved.
TOP STORIES
Boy, 11, suffers burns during bonfire explosion
Relief coming for residents enduring deafening steam plant noise
Son of Philly police officer shot, killed during apparent robbery
Another volatile day on Wall Street. Is it time to worry?
AccuWeather: Back to the 40s Tuesday
Officials ID victim killed in Montco crash; 4 others seriously injured
Mayor Kenney to undergo heart procedure Tuesday
Show More
Getting paid on Venmo or Cash App? New tax rule might apply to you
Philly sees more graffiti during COVID, but artists say it's an outlet
Tax season officially begins. Here's everything you should know
Introducing Millville, New Jersey's first female mayor
Dad charged and fired from job after racist tirade posted on TikTok
More TOP STORIES News