Zach Ertz, Julie Ertz say thanks to inspiring family of 6 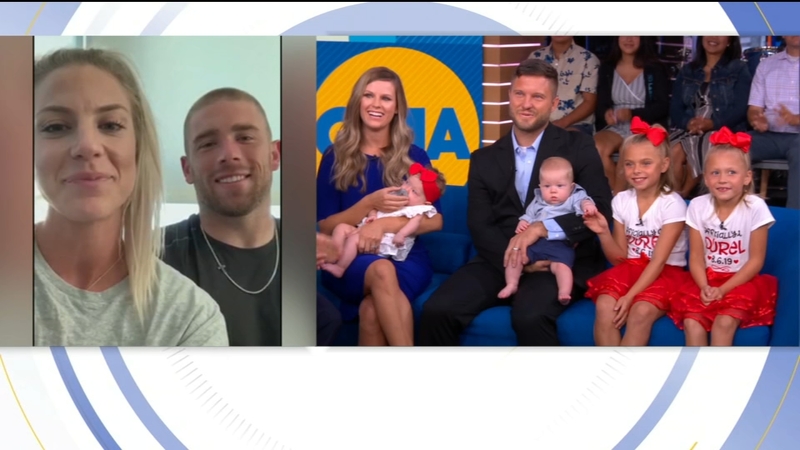 A Super Bowl champion and World Cup champion had a special message for a family of six that is continuing to count their blessings.

For Calena and BJ Durel being surrounded by their kids is more than a dream come true - it's a miracle.

The Ohio couple says they went through five years of infertility.

"We tried different avenues, insemination, medicines, so many different things and we were never successfully pregnant," Calena said.

So in 2016 they decided to start their journey as foster parents and were asked to watch a pair of sisters for an afternoon.

"We took the girls to the park and it was an instant connection," Calena said.

They continued to keep in contact with sisters Aubree and Mariah. Two years later, an Ohio judge decided the girls needed a forever home.

"The girls were asked if you could pick parents who would you want to pick and they said us and we knew then we were not going to say no to them," BJ said.

And then another miracle. Two weeks after deciding to adopt the girls, Calena and BJ found out they were pregnant with twins, eight years after trying to become pregnant on their own.

"We waited so many years to have one child and now we're getting blessed with four. It's amazing," BJ said.

Calena and BJ say they have been bonding with Aubree and Mariah over sports, especially soccer.

'Good Morning America' passed on that information to two people who were very happy to hear that.

"We heard about your story and we wanted to say thank you for being such an inspiration to so many people across the world. We understand that life is such a gift and we know that your story is going to inspire millions across the world," Zach said.

"Hi Mariah and Aubree! We heard that you might possibly think about playing soccer this upcoming season so hope you have so much fun learning the game. We're huge soccer fans," Julie said, adding, "All the best to your family. God bless. And thank you so much for sharing your story."