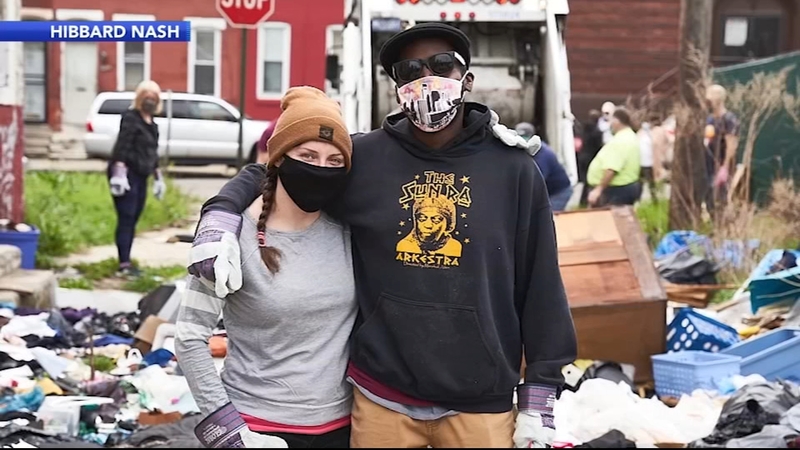 Back in June, Haigler launched his Instagram account known as Ya Fav Trashman, which now has more than 24,000 followers.

He wanted to bring awareness that a lot of sanitation workers were up against during the summer when the industry was getting a bad rep for delays with trash pick-ups.

Since then, Haigler's mission is to educate, advocate and integrate for anything that deals with sanitation workers.

"What I've learned is community is the most important thing in Philadelphia," Haigler said.

The father of three is no longer a sanitation worker. He left the Philadelphia Streets and Sanitation Department back in February, but his mission to clean up Philadelphia continues to flourish.

Since January, he's hosted neighborhood clean-up events throughout the city. He invites elected officials to interact with the community and clean up the streets.

This past weekend was a success on the 600 block of North Hutton in West Philadelphia. Several corporate sponsors including Global Industrial Supplies contribute to the effort.

Often there are free food giveaways and volunteers get to enjoy music provided by a DJ.

Philadelphia Councilmember Jamie Gauthier and State Rep. Amen Brown both participated in the most recent effort.

"It sends a message that we can get things done and we do care about our communities. And just to see a different population come and pick up things by hand," Rep. Brown said.

This upcoming weekend Haigler and Rep. Brown are holding an Earth Day Neighborhood Clean-Up Effort at West Mill Creek Park at 5100 block of Parrish Street. Ya Fav Trashman's motto is 'wear a mask and bring a friend.'

"Philadelphia was named the dirtiest city by Forbes and it is my goal to take us from last to first. And I want to be the cleanest city in America by 2024," Haigler said.

Haigler will be presented with a Congressional citation from Congressman Brendan Boyle (PA-02) on Tuesday morning. It recognizes Haigler's compassion and professional dedication as a frontline worker throughout this pandemic, and for using his sanitation department position in tandem with his Instagram social media platform to help inspire and educate Philadelphians on how to better navigate through the pandemic.

For more information on how to get involved or to suggest an area to clean up, people should reach out on Instagram @_yafavtrashman.
Report a correction or typo
Related topics:
community & eventsphiladelphiafeel good
Copyright © 2021 WPVI-TV. All Rights Reserved.
More Videos
From CNN Newsource affiliates
TOP STORIES