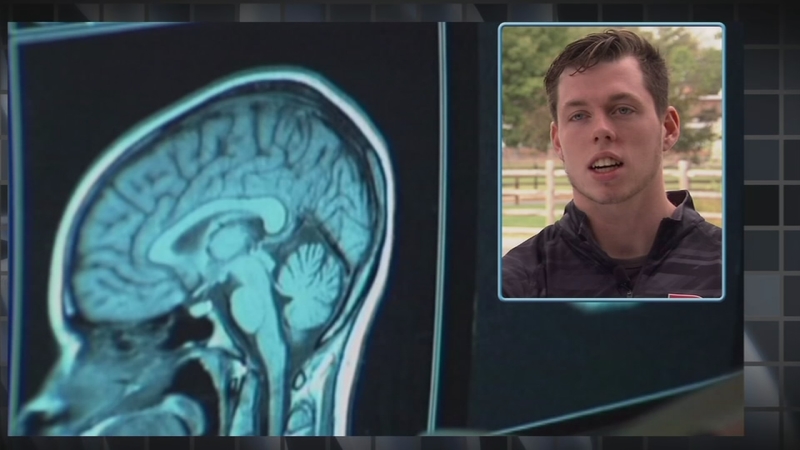 Chase Finnegan, a student at Rutgers University, is facing a bright future. But it wasn't always so bright. During his junior year of high school, he suffered his fifth severe concussion.

"It happened so many times, I didn't even feel the effects right away," Chase says of his concussions. "After coming out of the game, it hit me hard."

While at Eastern High School in Voorhees, Chase was a two-sport star. He played lacrosse and basketball and had been an athlete his whole life.

"'Chase' was an appropriate name - because all we did was chase him," recalls Rob Finnegan, Chase's father. But after the fifth severe concussion, the Finnegans began to worry about the long-term health consequences and if was safe for Chase to continue playing sports.

"He slowed down a little bit," says Rob Finnegan. "He started to get a different attitude."

"Every concussion is not the same, and we don't do a cookbook treatment," says Dr. Gealt. "It's not necessarily the number of concussions that is cause for concern, but how long it takes to an athlete to recover from each one."

Education on the signs and symptoms are very important in treating a concussion. In the past few years, the media has brought the dangers of concussion to the mainstream by covering the issues experienced by current and former NFL players.

"Parents are definitely more aware, coaches are more aware, kids are more aware of concussion symptoms," says Casey Christy, Chase's athletic trainer at Eastern High School. He treated Chase's injuries in high school and referred him to Dr. Gealt. "He was frustrated with the repetitive nature of his injuries."

According to Dr. Gealt, athletes can sometimes suffer cumulative effects, which can lower their threshold and cause them to suffer more concussions.

"Your heart breaks," says Janet Finnegan, Chase's mom. "Oh my goodness, is this the concussion where we are going to see irreparable damage?"

Chase started to do his own research about NFL players and the long-term damage that can be caused by multiple concussions. It started to make him rethink his involvement in sports. Although his senior year was supposed to be a climactic season of lacrosse and basketball, he was concerned about the implications of suffering another concussion.

"I realized the gravity of the situation kind of early," recalls Chase. "If it happens again, it could lead to serious problems."

With the help of Dr. Gealt, and the support of his parents, Chase decided to give up sports. "It was a very emotional time for me," says Janet. "I knew how passionate he was about being a part of the lacrosse team."

"He took a very mature approach for an 18-year-old," recalls Dr. Gealt. "It's good that he was looking at the bigger picture and not just 'living in the moment'."

Now at Rutgers, Chase is currently pre-med, where his concentration is cell biology and neuroscience. He wants to learn about concussions, the symptoms they cause, how they occur, and what makes them so devastating.

"Whatever path that he chooses, we will be thrilled," says Janet.

About Cooper Bone and Joint Institute
As South Jersey's premier academic musculoskeletal center, the Cooper Bone and Joint Institute offers patients the full continuum of care. Our integrated team includes fellowship-trained and board-certified experts in orthopaedics, rheumatology, podiatry, and rehabilitation. From the prevention and diagnosis of degenerative joint disease or injury, to the latest surgical and non-surgical treatments and rehabilitation, patients can expect to receive comprehensive, world-class musculoskeletal care in one of our convenient locations.
Report a correction or typo
Related topics:
health & fitnesscooper
Sponsored Content
Copyright © 2022 WPVI-TV. All Rights Reserved.