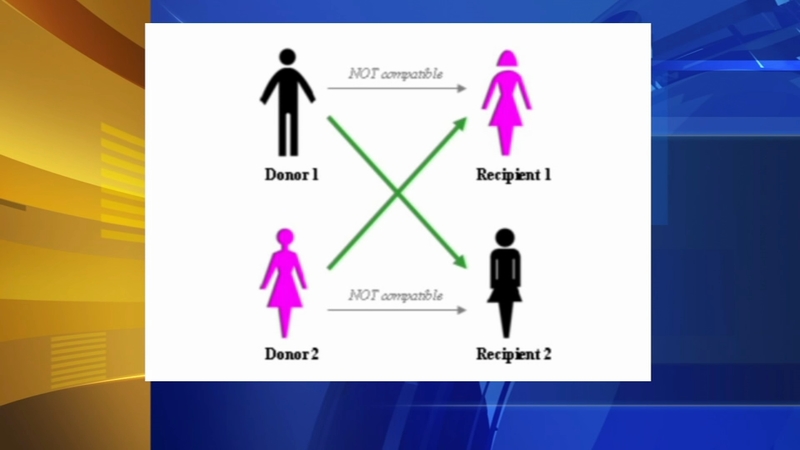 ROXBOROUGH, Pa. (WPVI) -- The Philadelphia area is the most generous in the nation on organ donations.

However, some on the waiting list are fortunate to find their second chance through living donors.

Teresa Relabate and John Fusco are among those who share that connection.

Teresa and John are almost family.

She knew John went into kidney failure in 2017.

"Dialysis was 3 days a week. And it just took over my life," says Fusco, an attorney.

But these lifelong friends figured he'd get a kidney from a deceased donor.

When that didn't happen after four years, the normally private Fusco made a direct, but upbeat Facebook appeal.

"Hey this is me, this is what I'm going through and if anyone cares to cough up a kidney, to let me know," Fusco says with a chuckle.

Relabate stepped right up, despite a strong anxiety about medical procedures.

Her husband, a physician, was part proud, part surprised, as she jokingly said.

"He said - you realize that - A) you've got to go through a lot of testing, and B) it's not something that's done over the phone."

They can also drop the waiting time from four to seven years to a few months.

"Dialysis keeps you alive, but it ages you prematurely. So the sooner you get a transplant, the healthier you are," say Dr. DiCarlo, the Chief of Abdominal Transplants

He says living donors must be healthy, with good medical histories.

They go through tests, including those to ensure they have a low risk of future kidney disease.

For example, Fusco lives in Roxborough, but Relabate lives in Connecticut.

Donors often come from even further away.

"I think I've done one from Alaska," notes Dr. DiCarlo.

She left Temple Hospital the next day, while he stayed six days.

Fusco had another complication, which put him back in the hospital and delayed his recovery.

But his new kidney has been working well throughout, although Relabate has some joking reservations.

"Because this is a New York Yankees and New York Giants kidney going into a Phillies and Eagles body, and I'm just not sure it's gonna work!" she says, laughing.

Teresa says no, that everybody has somebody in their world they'd do this for, if they know there's a need.
Report a correction or typo
Related topics:
health & fitnessorgan donationsmoves in medicine temple
Sponsored Content
Copyright © 2022 WPVI-TV. All Rights Reserved.