St. Katharine Drexel Motherhouse in Bensalem to be sold

WPVI
BENSALEM, Pa. (WPVI) -- The religious order founded by St. Katharine Drexel in Philadelphia has announced it is selling its two largest properties, including the 44-acre estate in Bucks County that contains the Motherhouse and shrine honoring the order's founder.

The Sisters of the Blessed Sacrament says St. Katharine Drexel's remains will be moved from the National Shrine of Saint Katharine Drexel to the Cathedral Basilica of Saints Peter & Paul in Center City Philadelphia "when the time is right" and placed near the altar honoring her there.

Also to be sold is a 2,220-acre property the order owns outside Richmond, Va. which once housed two schools for African-American students. 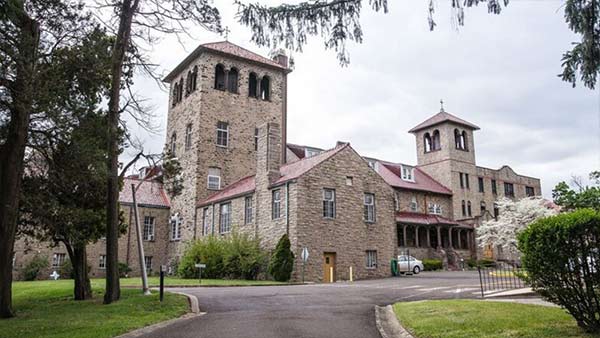 The Sisters of the Blessed Sacrament announced its plan to sell both properties on Tuesday.

"As we prepare to celebrate in July the 125th anniversary of our Catholic religious order, we rededicate our resources to our mission serving some of the most vulnerable people in the United States, Haiti and Jamaica," said the order's president, Sister Donna Breslin, in a statement.

"We also will use proceeds from the sales to challenge, in new ways, all forms of racism as well as the other deeply rooted injustices in the world. A portion of the proceeds will support the care of our retired Sisters," Breslin said.

The decision to divest the properties comes at a time when many of the ten buildings on the Bensalem property are no longer used, and when the number of sisters in the order has dwindled from more than 600 to just over 100, more than half of whom are now retired.

No potential buyers were mentioned in the announcement.

The closure of the buildings and relocation of offices and members still living at the Bensalem property is expected to happen next year.

The order says the National Shrine of Saint Katharine Drexel on the Motherhouse campus will remain open to visitors through 2017.

Care of many of the order's archives will also be taken over by the Archdiocese of Philadelphia.

The order has hired a firm specializing in the needs of religious congregations to help find new residences for the nuns currently living in the Motherhouse. The order's administrative offices will also move to a new location.

The Sisters of the Blessed Sacrament was founded by Mother Katharine Drexel in 1891. Mother Drexel died in 1955 and was elevated to sainthood in 2000.

St. Katharine Drexel is the second American-born person to be canonized.