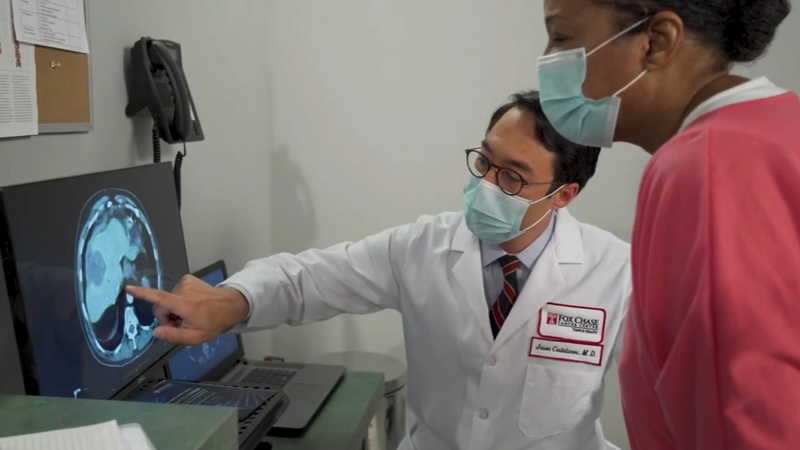 PHILADELPHIA (WPVI) -- Up to 70-percent of colon cancer patients eventually develop tumors on their liver. Often, they're told surgery isn't an option for the liver cancer. But a team approach by Temple Health and Fox Chase Cancer Center and a new high-tech tool can arrest that cancer.

"I was having a pain in my side for quite a few months," said Marisa Biancaniello of South Philadelphia.

But a bout of COVID and other issues delayed her trip for a colonoscopy.

"On May 3, I was diagnosed with the cancer in the colon, and then 2 days later, I had the CAT scan and there was a metastasis to the liver," she said.

Cancers that spread to the liver are complex, so Fox Chase Cancer Center and Temple Health work together on treatment. Dr. Jason Castellanos said they often use many tools at the same time, not just surgery.

"Leave as much liver as possible just treat the tumors," he said. "Nowadays, we would use ablation, either thermal or electric, to treat that specific little area."


"You're basically creating an energy around that probe, almost like a sphere, to kill everything in that zone," he said.

In addition of microwave ablation, Fox Chase is now also using the Nanoknife. It uses the principle of "irreversible electroporation".
"Instead of generating heat, we run an electrical current between two electrodes that are placed next to the tumor, and that sends electrons through that punch holes in the cell walls and the cell membranes, and that causes cells to die," said Dr. Castellanos. "This technique doesn't damage blood vessels."


Biancaniello lost parts of her colon and liver, and had three spots on the liver ablated. She recovered quickly, and is back running her boutique.

Biancaniello is working part-time while she undergoes chemotherapy. But she's back with her friends and customers.
Fox Chase and Temple also team up on other cancers such as kidney and gall bladder where interventional radiology comes into play.
Report a correction or typo
Related topics:
health & fitnessphiladelphiamoves in medicine fccc
Sponsored Content
Copyright © 2022 WPVI-TV. All Rights Reserved.