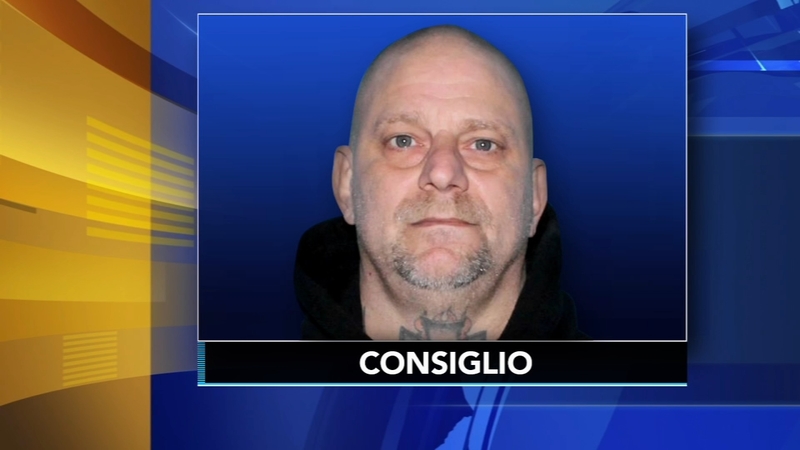 ELSMERE, Del. (WPVI) -- Police have a person in custody and have lifted a shelter-in-place order after an early morning explosion in Elsmere, Delaware.

The Delaware State Fire Marshal's office has charged Mark J. Consiglio, 48, of Elsmere, with 3 counts of manufacturing, possession and use of an explosive device after allegedly setting off an explosive device outside of the home where his estranged wife was staying Monday.

Consiglio's estranged wife Amy told Action News that she believes her husband was trying to kill her.

Authorities said around 12:25 a.m. Monday, Consiglio set off a small explosive device in front of a home in the 1300 block of Cypress Avenue.

Consiglio's wife said she had been staying with her mother in Cypress Avenue home since she and her husband separated approximately 6 months prior.

Witnesses said it was shortly after midnight that they heard a loud bang.

"It was a loud bang but there are [railroad] tracks back there, so I thought they were switching the tracks," said neighbor Maria Rosado.

The explosion punched a small hole through the window of the home where Amy was staying.

Authorities spent most of the day Monday conducting an investigation at Consiglio's home in the 700 block of Baltimore Avenue.

Officials from several agencies, including the state fire marshal, the Bureau of Alcohol, Tobacco and Firearms (ATF) and New Castle County Police arrived on the scene.

Nearby neighbors were ordered to shelter in place as officers deployed a robot and, dressed in explosive resistant suits, searched the premises, including a shed behind the house.

"You never know what goes through someone's mind," said neighbor Bob Caregrove. "They're hurt, they're upset. Everyone has problems."

Bags full of evidence were removed from the home on the 700 block of Baltimore Avenue. Officials said three additional explosive devices were recovered. Also taken was what appeared to be a firearm and a sword.

Amy Consiglio said her ex-husband has been threatening her ever since they separated.

"I'm hoping that my mom's OK. She's older. She shouldn't have to deal with this," she said. "I'm just happy that the law did what they are supposed to do."

Officials said Consiglio is expected to be arraigned Tuesday night and additional charges are expected.