'One name too many:' Philadelphia Union wear names of Black people killed by police on jerseys 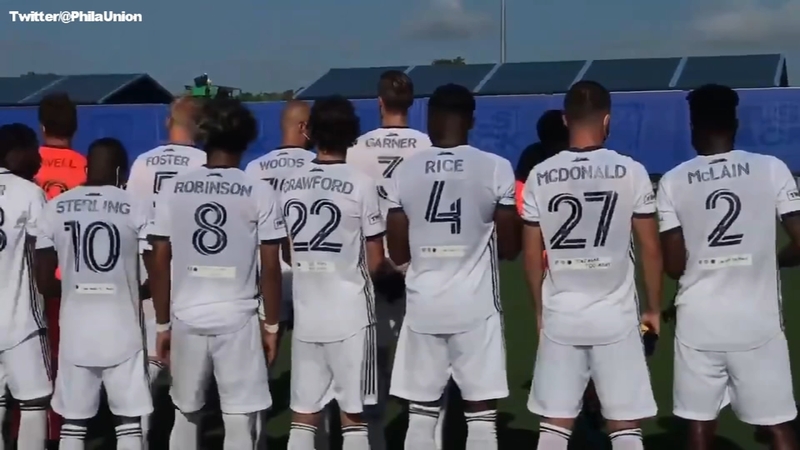 ORLANDO, Florida (WPVI) -- The Philadelphia Union made a statement ahead of the kickoff to their first game at the MLS is Back Tournament in Orlando, Florida on Thursday morning.

After taking a group photo, each player removed their shirts to reveal their match jerseys.

But unlike the usual jerseys, these did not read the players' last names.

Each Union player was wearing the name of a Black person killed by police.

"This is interesting. Those are not the names of those players," commentator Taylor Twellman said. "Those are the names of Black people who were killed from police brutality."

He called it, "Extremely powerful."

According to Twellman, the white players were wearing names of victims who they learned about through speaking to other members of their team.

"It is a long list of people, a long list of victims who were murdered and ultimately we can sometimes get lost in the names, but highlighting some of their lives, and trying to bring a positive light to them, I think that was the most important part," said player, Mark McKenzie.

The commentators mentioned MLS had told them about patches both teams would be wearing, but the jerseys came as a surprise.

The bottom of each jersey read "One name too many."

"The idea behind today, was action over permissions and I hope that the league understands that. I hope everyone can embrace it and wrap their hands around it. It was done to show respect, to learn, to grow and to make our country better," said Union Head Coach, Jim Curtin.

Our players joined together to create a custom armband for #MLSisBack that our Captain @AleBedoya17 will be wearing for the tournament.#SayTheirNames pic.twitter.com/ZZe4Ev2RCJ

"This isn't something that myself or any member of the Black Community wants to take on by ourselves. We need everybody to want to step up and want to impact change," said player, Warren Creavalle.

The team says players are also wearing specialty #EndRacism shin guards during the tournament and beyond.

Our entire squad will be wearing these specialty #EndRacism shin guards during #MLSisBack tournament & beyond.#DOOP pic.twitter.com/mGZ4gT9MZv

On Wednesday night, prior to the first game of MLS' return, the group Black Players for Change made its first public demonstration since coming together last month.

Players stood, fists raised, for 8 minutes and 46 seconds, the time that has become a symbol of police brutality, after a Minneapolis police officer had his knee on George Floyd's neck when he died. More than 170 Black players, some wearing "Silence is Violence" T-shirts and Black Lives Matter face masks, took part in the pregame protest.

The Union's match on Thursday morning brought the return of Philadelphia sports since the coronavirus shutdown in March.

The team will take on Nashville SC on Tuesday, July 14 and Inter Miami CF on Sunday, July 19.

The MLS is Back Tournament is the league's restart to the 2020 season with MLS clubs competing at ESPN Wide World of Sports Complex at Walt Disney World Resort.