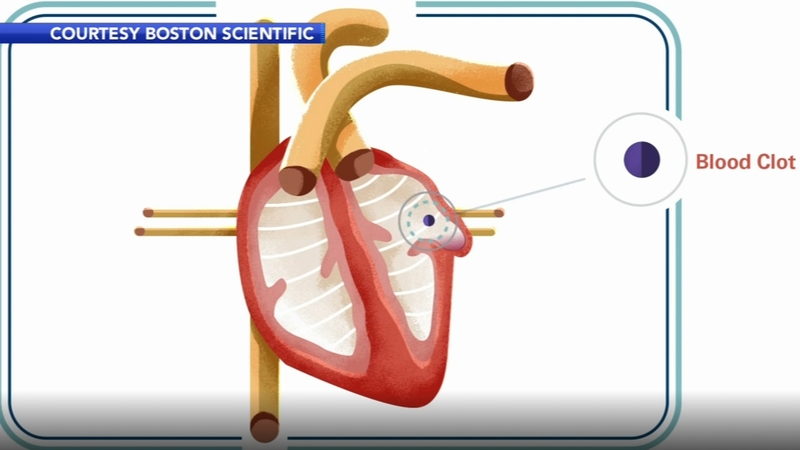 There are several other approaches to a-fib, including a device called Watchman.

"I love to work on some little projects in the house," Chiampi says, adding, "I do my own repairs."

"I had no symptoms and I still don't have any symptoms," he says, shaking his head in amazement.

Irregular blood flow can lead to blood clots in the heart.

"If those blood clots dislodge and travel, they can block an artery, and the most feared artery blockage is one in the brain," says Dr. George Yesenosky, a Temple Health cardiologist specializing in electrophysiology, the electrical circuitry of the heart.

And after 1 blood thinner gave him nosebleeds, and another triggered a brief stroke-like episode, he became a good candidate for the Watchman, a tiny umbrella-like device..

"Above 90% of the blood clots that form from atrial fibrillation occur in a region of the heart called the left atrial appendage," says Dr. Yesenosky.

That appendage, or pocket, doesn't serve any use.

So the Watchman closes it off.

In a minimally-invasive procedure, the tiny umbrella is threaded inside a catheter, through a vein in the leg up to the left side of the heart and into the appendage.

Dr. Yesenosky actually does a lot of pre-planning, to ensure the Watchman completely blocks the pocket, to eliminate any risk of blood clots.

Watchman devices come in many sizes, because, "Not everybody's appendages are the same," says Dr. Yesenosky.

"Some look like a wind sock, some we call them a chicken wing, because it looks like a chicken wing. And others have just multiple lobes like a piece of cauliflower," notes Dr. Yesenosky.

Measuring the pocket and simulating the implant before the procedure reduces the time.

"If everything meets our criteria, then we release the device and that stays in there for the rest of the patient's life," says Dr. Yesenosky.

About 6 weeks later, after a test showing the Watchman still firmly in place, Mike traded blood thinners for a daily baby aspirin.

And he was already back to normal activities.

"We had some nice weather around Christmas time. I even golfed a few times," says Mike.

He's thrilled to put his attention on projects, and not worry as much about strokes or bleeding.

Mike says another big benefit to Watchman is not paying high co-pays for brand-name blood thinners.

"When the samples were over, the copay for Xarelto or Eliquis, it's hundreds and hundreds of dollars," Mike says.

"Its prohibitive for some people and, you know, that was a little concern," he says, adding, "Paying that kind of money for a medication just seems un-American."
Report a correction or typo
Related topics:
health & fitnessmoves in medicine temple
Sponsored Content
Copyright © 2022 WPVI-TV. All Rights Reserved.
MOVES IN MEDICINE TEMPLE
SPONSORED: "Spray-on skin" heals major burns in two-thirds less time
Non-Alcoholic Fatty Liver - a very common disorder lacking awareness
SPONSORED: Caring for the whole patient - and beyond - after burn injuries
SPONSORED: Asthma in adults: Triggers, symptoms, diagnosis and treatment