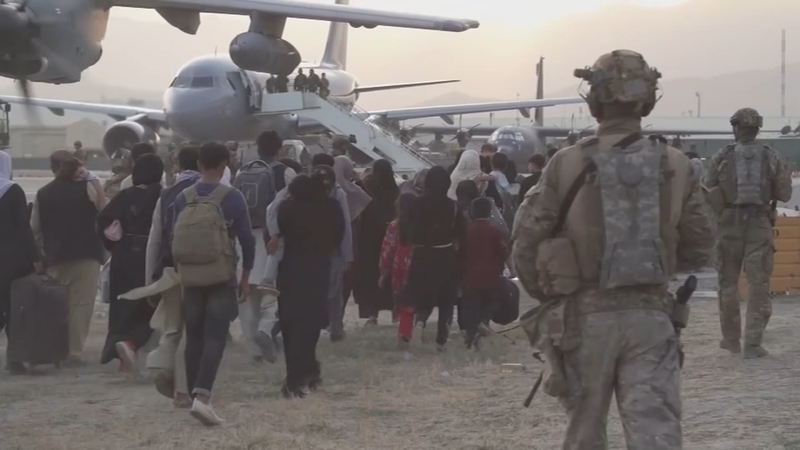 PHILADELPHIA (WPVI) -- Two suicide bombers and gunmen attacked crowds of Afghans flocking to Kabul's airport Thursday, transforming a scene of desperation into one of horror in the waning days of an airlift for those fleeing the Taliban takeover.

The U.S. general overseeing the evacuation said the attacks would not stop the United States from evacuating Americans and others, and flights out were continuing.

Gen. Frank McKenzie, head of U.S. Central Command, said there was a large amount of security at the airport, and alternate routes were being used to get evacuees in. About 5,000 people were awaiting flights on the airfield, McKenzie said.

The blasts came hours after Western officials warned of a major attack, urging people to leave the airport. But that advice went largely unheeded by Afghans desperate to escape the country in the last few days of an American-led evacuation before the U.S. officially ends its 20-year presence on Aug. 31.

He says it's unlikely that all remaining Americans will make it out of the country before the deadline, and operations to get them will continue past August 31.

President Biden had stern, harsh words for ISIS K following attacks at Kabul airport that killed at least 12 US troops and at least 60 Afghans.

"The CIA, they have been making extractions already. Very dangerous. They're going out into the backcountry, getting Afghans that can't get to Kabul, getting Americans in other cities," said Tomarchio.

"I'm not critical of the administration here. These are hard operations. If you see one up close in person, I understand what they're going through," Tomarchio added.

He also says US forces shouldn't be relying on the Taliban for assistance while we remain.

"We're relying on people to secure the perimeter whom we don't trust, whom we shouldn't trust. We know they're murderers," said Van Drew.

Democratic Congressman Brendan Boyle of Pennsylvania's second district says Biden did what four other presidents wouldn't do before him.

"If there was an easier way to get out of Afghanistan one of his predecessors would have done it," he says.

Boyle says the intelligence community was trying to get Americans out before the chaos.

"The State Department points out that 19 different occasions they attempted to contact American citizens they know in the country to invite them to leave, and then with greater urgency over the last several months," he said.

U.S. officials initially said 11 Marines and one Navy medic were among those who died. Another service member died hours later. Eighteen service members were wounded and officials warned the toll could grow. More than 140 Afghans were wounded in the Thursday attack, an Afghan official said.