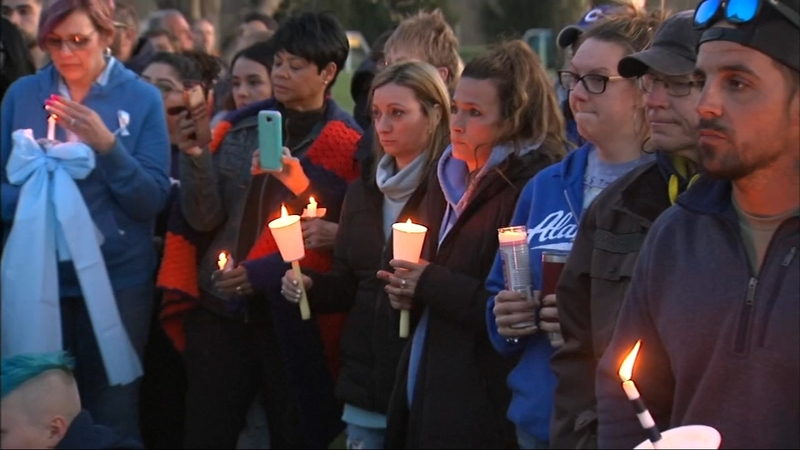 CRYSTAL LAKE, Ill. -- A case worker and supervisor at the Illinois Department of Children and Family Services were reassigned to administrative duties the same day the agency released a timeline of their interactions with AJ Freund's family.

Andrew "AJ" Freund, was found dead on Wednesday. The agency's first contact was back in 2012, involving two unfounded cases.

"The death of a child that was in our care and a family that we were involved with is unacceptable to me and this department," said Marc Smith, DCFS acting director.

In the timeline, the agency's first interaction with Joann Cunningham, AJ's mother, took place in 2012 about a year and a half before AJ was born, regarding allegations of drug use and neglect involving a foster child and Cunningham's older son. The accusations were determined to be unfounded.

A case worker and supervisor at DCFS were reassigned to administrative duties Friday, the same day the agency released a timeline of their interactions with AJ Freund's family.

The agency was then called in when AJ was born in 2013 with opiates in his system. He was placed in DCFS custody but returned to his parents in 2015 after Cunningham and AJ's father, Andrew Freund, Sr., participated in a drug treatment program and parenting classes.

DCFS made 17 unscheduled visits to the family's home in 2015 and 2016, as well as nine supervised visits. AJ's case was then closed in 2016 until 2018, when another hotline report alleged neglect.

AJ was observed by a doctor with "odd bruising on his face," but DCFS concluded the allegations were unfounded. Last December police observed a "large bruise on hip." AJ told an emergency room doctor the bruise may have been caused by a belt, and said "Mommy didn't mean to hurt me."

He remained in his parents' custody until his death. Freund Sr. and Cunningham are being held on $5 million bond each after being charged with his murder.

You can see the full DCFS timeline at the bottom of this article.

RELATED: How did Crystal Lake police crack the case of AJ Freund?

"We really need to revisit some of these cases before they are murdered by their parents," said Illinois State Rep. Sara Feigenholtz (D-Chicago) at a hearing Friday.

Illinois lawmakers demanded answers as Acting Director Smith announced the reassignment of AJ's case worker and supervisor. State Rep. Anna Moeller, who was born to a heroin addicted mother and raised by her grandparents, questioned why the system allows for kids to be returned to high risk parents.

While it reviews AJ's case, DCFS said it plans to improve and correct the way it responds to children and families. Smith is asking to increase the agency's budget by $75 million to pay for an additional 126 employees. He is the agency's 13th director in 10 years.

A public visitation for AJ was announced Friday. A visitation will be held Friday, May 3, from 1 p.m. to 8 p.m. at davenport Family Funeral Home at 419 East Terra Cotta Avenue in Crystal Lake.

A family friend of AJ's older brother set up a GoFundMe page to help pay for funeral expenses, with any extra money raised put into a fund for AJ's younger brother.

More than 100 people gathered in a soccer field, most wearing blue, AJ's favorite color, at a Friday night vigil.

The crowd held candles to honor his life.

"It's been one of the most difficult weeks that our community of Crystal Lake and McHenry County has ever experienced," said one attendee.

"It touched everybody to the point that they almost kind of felt as if he was their own child," said Heather Zaranto.

There was also anger directed, much of it toward DCFS.

"He should have never had to deal with this, he was failed so bad," said Deborah Rhoderick.

"I feel that DCFS may have failed all of us, not only his family but all of," said Stephanie Moctezuma.

On Thursday, neighbors created memorial on the front lawn of AJ Freund's home. What once started as a symbol of for his safe return became a place for people to honor and grieve the loss of the 5-year-old boy.
"It makes a mark on the community you can never erase," said Debra Olson, neighbor.

Neighbor Janelle Butler and her neighbors said they plan to meet with Crystal Lake's mayor Friday to propose turning the family's home into a park to honor AJ. The Crystal Lake Lion's Club has already raised about $15,000 to help cover the cost of the boy's funeral.

AJ was reported missing on the morning of April 18, nearly a week before his body was found. His parents said they last saw him when he went to bed the night before.

On Wednesday, AJ's body was found on farm property in nearby Woodstock, Illinois. Police then announced first-degree murder charges as well as aggravated battery, and failure to report a child death charges against his parents.

Criminal complaints released Thursday reveal horrific details about what allegedly led to AJ's death on April 15, three days before he was reported missing.


According to a statement from the McHenry County Coroner, AJ died from injuries to his skull and brain. In court Thursday, prosecutors alleged the parents "forced the boy"....identified by his initials 'AF'..."to remain in a cold shower for an extended period of time and/or struck A.F. on or about his body, knowing such acts would cause the death of A.F."

The parents of 5-year-old Crystal Lake boy Andrew "AJ" Freund, whose body was found Wednesday, were charged in his murder.

Here's a closer look at the Illinois Department of Child & Family Services's connection to AJ Freund starting at his birth.

DCFS has released a timeline of its history with the family.

"06/07/12: DCFS received a hotline call alleging inadequate supervision. The allegations were that JoAnn is abusing prescription drugs and neglecting her foster child. The report was unfounded and expunged.

12/24/12: DCFS hotline received a call alleging environmental neglect and injurious environment as to her oldest son. The report alleged JoAnn is abusing prescription drugs and has mental health issues. The report was unfounded and expunged.

10/16/13 : DCFS received a hotline report alleging substance misuse by neglect, after JoAnn gave birth to Andrew on 10/14/13. Andrew and JoAnn tested positive for opiates and benzodiazepines. The report was indicated for Substance Misuse. Andrew was removed from his mother's care during the investigation.

11/12/13: DCFS takes protective custody of Andrew.
11/14/13: DCFS is granted temporary custody of Andrew in Juvenile Court. Youth Service Bureau of Illinois is assigned to provide services to the parents and Andrew.

June, 2015 Judge orders Andrew returned to the custody of his mother.

03/21/18: DCFS received a hotline report that alleged substantial risk of physical injury/injurious environment and environment neglect against the mother and father. The report alleged that the mother was brought to the emergency room after being found unresponsive in a car. Andrew was observed at the hospital to have odd bruising on his face.
DCFS investigator contacted the parents in unsuccessful attempt to see the children on 03/21/18, 3/29/18 and 4/9/18, 04/25/18 DCFS investigator met with JoAnn, Andrew and his younger brother. JoAnn was interviewed while the boys played outside in the driveway of the home. DCFS investigator observed the boys to be clean and did not find signs of maltreatment.

05/17/18: DCFS investigator completed a final safety assessment of the home. Both boys were observed clean and dressed appropriately. Mother reported a history of drug use and current drug treatment. The home was observed to be clean, neat and adequately furnished.

05/18/18: DCFS investigator verified mother's participation in a drug treatment program. The report from March, 2018 was unfounded and the investigation closed.

12/18/18: DCFS received a hotline report alleging environmental neglect as to both boys and cuts, welts and bruises as to Andrew. After being called to the home by the mother, police observed a large bruise on Andrew's hip. Police observed the ceiling falling down, the floor torn up, and the kids' bedroom smelled of dog urine. JoAnn was arrested for driving on a suspended license and Protective Custody was taken of both children.

12/18/18: ER Physician examined Andrew and could not state how his injury was caused. The doctor reported injury could have been caused by a dog, belt or a football. The doctor was concerned because Andrew stated that "maybe someone hit me with a belt. Maybe mommy didn't mean to hurt me." DCFS investigator contacted the father to pick the children up from hospital until the home environment can be assessed. The father was asked to remain in the home as a safety precaution.

12/19/18: DCFS investigator conducted an unannounced home visit. The home was observed. The living room and dining room were cluttered with clothes and toys. The kitchen was clean and the floor was missing tile. The ceiling was not falling and investigator sensed a slight odor of dog urine. No feces or urine was observed on the floor. The father reported to the investigator that he did pick the children up from the hospital last night. The father denied any corporal punishment and he denied mother using drugs.

01/04/19: DCFS unfounded the report due to lack of evidence for cuts, welt and bruises allegation.

04/18/19: The police were called to the home in response to Andrew being reported missing and DCFS received a hotline report alleging environmental neglect and inadequate supervision. Police observed the home to have ripped up floors, food lying around and clothes/garbage everywhere.