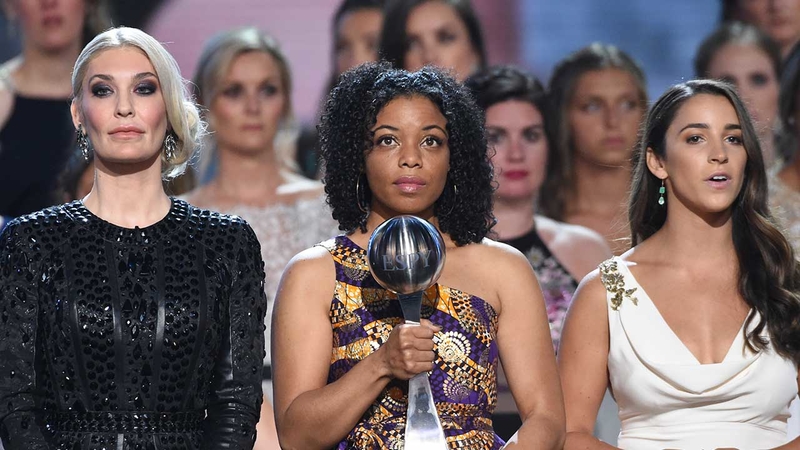 BRISTOL, Conn. -- ESPN honored the hundreds of athletes who spoke out about sexual abuse at the hands of their team doctor with the Arthur Ashe Courage Award on Wednesday.

“To all the survivors out there, don't let anyone rewrite your story. Your truth does matter. You matter. And you are not alone.”

Tonight, Aly Raisman and her sister survivors brought the #ESPYS audience to their feet. pic.twitter.com/0sVTI0wLUH

The large group of athletes, which includes Olympic gold medalists Aly Raisman, Gabby Douglas and others, was treated by Larry Nassar at his Michigan State office over the past several decades. Nassar pleaded guilty to molesting women and girls under the guise of treatment and is currently serving prison sentences that will likely keep him locked up for life.

After a standing ovation for the survivors onstage, the ESPYS audience remained on their feet as three women, surrounded by their "sister survivors," spoke about their experiences: Raisman, softball player Tiffany Thomas and Sarah Klein, who identified herself as Nassar's first victim.

Speaking last, Raisman outlined how hard it was to get someone to listen to their stories.

Raisman also emphasized the importance of having empathy for others.

"We all face hardships. If we choose to listen and we choose to act with empathy, we can draw strength from each other," she said. "We may suffer alone, but we survive together."

The award comes after his sentencing hearing, during which many more of his victims gave emotional impact statements about their experiences with Nassar.

"We are honored to recognize the courage of these women at The 2018 ESPYS, to acknowledge the power of their voices, and to shine a very well-deserved spotlight on what speaking up, fighting back, and demanding accountability can accomplish," ESPN's Alison Overholt said in a news release. "They have shown us all what it truly means to speak truth to power, and through their bravery, they are making change for future generations. By honoring this group who spoke out, we aim to honor all of those who are survivors of abuse."

For more than two decades, ESPN has presented the Arthur Ashe Award for Courage to a public figure, often in the sports world, who demonstrated "strength in the face of adversity, courage in the face of peril and the willingness to stand up for their beliefs no matter what the cost."