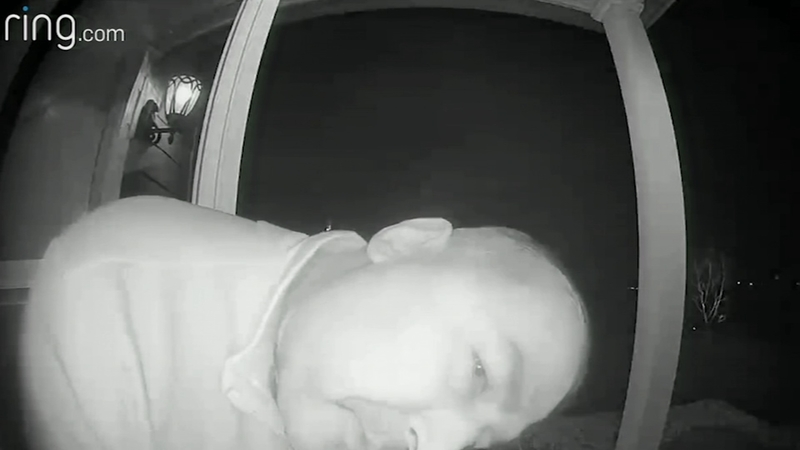 CHESTER CO., Pa. (WPVI) -- A Chester County, Pennsylvania family is looking for answers after it appears an intruder was in their home.

The suspect was captured on video by their Ring doorbell security camera earlier this year. Oddly, their security camera caught him coming out, but not going inside the house.

And their home security system never registered that the man was inside.

The case has stumped investigators and security experts, and may have you questioning how secure your camera system is.

The man in question appears to be trying to dismantle the Ring camera. He looks at it from different angles and then retreats back into Nemo Perera's house.

The family watched this while out to eat one night in February.

"My heart sank and we, unfortunately, made the mistake by showing our four little kids the video so they were panicking. So my wife called the police and we raced home," Perera said.

What's troubling: the Pereras don't know how the burglar got inside their home.

The family has two Wi-Fi networks. One controls their ADT Security System, which was partially hardwired, and the other controls their Ring doorbell system.

Yet neither system captured the intruder going inside nor did ADT motion sensors inside pick up any activity.

Perera said, "So we have the Ring logs and they show that we left the house at 7:11 p.m. and the Ring stopped working from that point on except for this one image that it took at 7:45 p.m."

"I personally think that someone shut off the Wi-Fi system. If they know the password to get into the Wi-Fi, that's a pretty easy way to get in," said Pearson.

But Perera says he did not have default Wi-Fi passwords and accessing his Wi-Fi networks would've been difficult. He says other security experts told him he may have been the victim of Wi-Fi jamming.

That's where criminals use an illegal device to send out a blast of synchronized radio waves that cripple Wi-Fi networks. Despite stiff fines for possessing one, they're easy to find on the internet for a few bucks.

Pearson says they are a concern

"Wi-Fi jamming is a concern and more of a concern these days. It was certainly a concern for Nemo," he said.

Perera says ADT provided few answers as to what happened.

"So we've asked our ADT folks to explain to us what's happening and they can't explain it. They're trying to run it up the flag pole," said Perera.

Even more baffling: the Pereras say they haven't found anything stolen.

They suspect Nemo Perera's hard drive may have been copied because of business interests, but security experts say there is no evidence that happened.

Police say they have no suspects or leads, and the Pereras hope someone recognizes the intruder and helps investigators.

Perera says, "We can't think of the reason why. It's very troubling. So to find out what their intent would be very important because I think it's also mystifying the police. They're wondering why they did this as well."