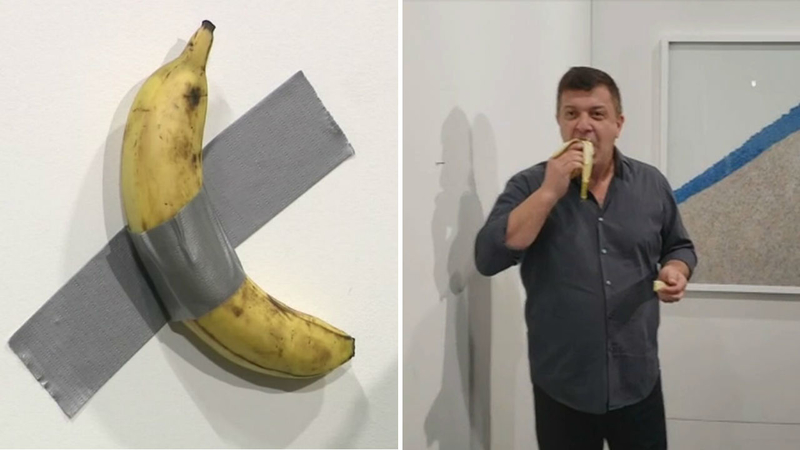 NEW YORK (WPVI) -- A man is talking about the moment he removed a $120,000 banana from an exhibition, peeled it and ate it at a Miami art gallery this weekend.

New-York based performance artist, David Datuna, posted a video of his stunt Saturday that soon went viral. On Monday, he spoke out about the bold move to reporters back in New York City.

The piece of art, created by renowned artist Maurizio Cattelan, consisted of a store-bought banana that was duct-taped to a wall. There were three editions of the banana-duct tape installation. Two bananas had already sold for around $120,000, according to the gallery.
Datuna deicded to one-up Cattelan with some art of his own. He said he was hungry, so he removed the banana and ate it in front of a big audience as cameras were rolling.

He said people looked stunned when he ate the high-priced fruit.

"Fifty-percent of people say don't do this it's crazy. Another 50 percent say do it it's genius," he said. "So you know it's absolutely what art about. Art is about the question mark."

He further explained he thinks the artist was joking with the installation, and in turn, he was having fun with the joke.
Datuna said this is how artists communicate with each other -- trading one bold move for another -- and while he insists he didn't do it for publicity, he certainly hasn't minded all the attention.

"This was an art performance for me, and absolutely I'm not sorry," he said.

The gallery was not amused by the stunt and security escorted Datuna from the gallery. He is still not sure if he's in trouble or not, but said he would do it again.

The gallery has replaced the banana with another one and there are now security guards keeping watch on it, and long lines of people curious to see it.

Datuna said he has gotten support from tens of thousands of people after posting the stunt on Instagram. He also promised his next performance will top this one, so stay tuned.