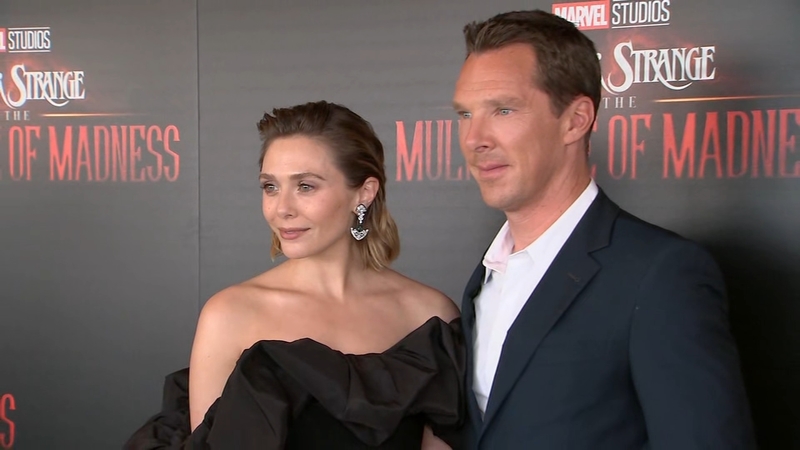 MIDTOWN, Manhattan -- Give Marvel fans a movie called "Doctor Strange in the Multiverse of Madness," and the true believers know exactly what to expect. But the rest of us may be wondering, what exactly is a multiverse?

Well Benedict Cumberbatch is here to help, as the star explained the concept to Kelly Ripa and Ryan Seacrest on their popular "Live" show this week.

"Imagine that there is a reality dissimilar, very similar, not at all similar to this one happening in parallel to this," he said.

His appearance was part of a publicity blitz that brought him to a premiere at 30 Rockefeller Plaza in Midtown Manhattan on Thursday evening.

"Doctor Strange in the Multiverse of Madness" is in theaters Friday but is already breaking box office records as the most pre-sold movie of the year so far.

Cumberbatch was rehearsing for his hosting gig on "Saturday Night Live," so the party came to him, and the 65th floor location was just an elevator ride away from where he was prepping.

Playing Doctor Strange has proved popular for the star, and the character's crucial role in the recent "Spider-Man: No Way Home" helped that movie gross $1.89 billion around the world.

He said it was helpful in getting people to start going to movie theaters again.

"I think this is a rolling continuation of that," he said. "These are films that are made to be seen in an exhibition space, in a cinema, to have a communal experience."

The new movie is also a showcase for the talents of Elizabeth Olsen, who is coming off the hit Disney+ series "WandaVision" and plays the same character again, this time back on the big screen.

"It was really amazing to get to play her now as this confident woman with this clarity and empowered by being this mythic woman, this Scarlett Witch," she said. "And I get to milk it a lot in this film."

Director Sam Raimi is bringing together several Marvel characters for an epic adventure in "'Doctor Strange and the Multiverse of Madness."

She laughed thinking about all the over-the-top moments in "Doctor Strange in the Multiverse of Madness."

Olsen graduated from New York University's famed Tisch School of the Arts, but still, her post-education career has been a surprise even to her.

"I thought I'd be doing a lot more theater and occasional independent films," she said.

It was a 2011 independent film "Martha, Marcy, May, Marlene" -- she played all four characters -- that served as Olsen's film debut and our introduction to her talents.

It's the kind of talent seen just a few times in a generation, and it's her talent that makes this new movie so worth watching.

"To have a good time and be entertained, and be scared, and go for a ride," she said.

"Doctor Strange in the Multiverse of Madness" is from Marvel Studios, owned by the same parent company as this ABC station.

Benedict Wong is back on the screen playing a sorcerer also named "Wong," in the much-anticipated "Doctor Strange and the Multiverse of Madness" movie