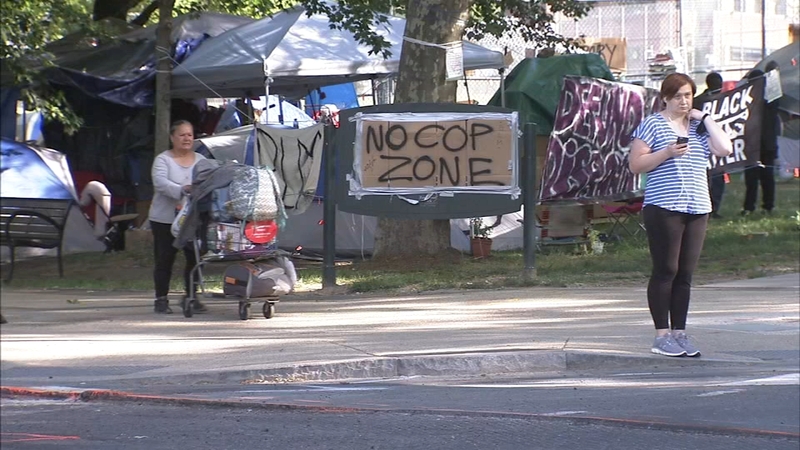 PHILADELPHIA (WPVI) -- An encampment is growing along the Benjamin Franklin Parkway in Philadelphia.

Organizers tell Action News that it serves as a two-fold protest: to continue support of the Black Lives Matter movement and to bring awareness to the city's homelessness problem.

However, city officials said it is "not a long-term solution to homelessness and we are concerned about the safety and health of the individuals there."

Jennifer Bennetch, one of those organizers with Occupy PHA, said deep down they don't want to have these encampments.

"No matter what side of politics people are on, just moving these living, breathing human beings, who aren't gonna disappear off the face of the earth, from place to place is never gonna solve this issue," Bennetch said.

Bennetch said, unless their demands are met, they're not leaving.

If the city moves them by force, she said, "We'll just move to another location."

Some of their demands include:

The growing encampment along the Benjamin Franklin Parkway in Philadelphia serves as a two-fold protest.

Ronald Story is one of the homeless people who live in the encampment.

"This is going to last until everyone out here gets a house," Story said.

Early last week, Museum District Resident Mike Fuhs noticed a couple of tents on the baseball diamond on Ben Franklin Parkway at 22nd Street. He thought nothing of it until later in the week when, looking out of his building, he saw dozens more tents put up by protestors who created an encampment.

"I understand their point," said Fuhs, "But it's out of control."

Fuhs says the encampment worries some of his neighbors who have concerns over cleanliness, noise and safety.

"Neighborhood kids are going to start playing ball there soon I don't think you want the kids to see this," he said.

The growing encampment now includes dozens of tents. But protesters insist they are operating as a peaceful community.

Neighbors nearby said they have not had any problems with the encampment or its residents.

"It doesn't bother me that much. I haven't noticed any disturbance or anything. I think if they feel like they need to be heard, this is a good way to be heard," said Fairmount resident Nick King.

While residents' reactions to the encampment range from frustration to understanding, they all agree that it's something the city has to address at some point.

"Inaction is not acceptable at this point. Something has to be done," said Grant McHaney of Fairmount.

Jamon Johnson, a local pastor who has been helping out at the encampment, said the people currently living on the parkway just want a better life.

"A lot of them here are not here because they chose to be here," Johnson said.

On Monday night, City Hall responded. Mayor Jim Kenney's office said officials are aware of all the demands made by the group.

The city released the following statement:

"The city respects the right of people to protest peacefully. However, tent encampments often pose a health and safety threat and are specifically prohibited on park property. The city reached out to representatives over the weekend with an offer to meet and listen. We made clear that hotel rooms with private bathrooms are available for those who are particularly vulnerable to COVID-19 (age 65 or over or with underlying health conditions). We have received an updated set of demands and are reviewing them now.

I do want to stress, however, that this encampment was originally organized not by homeless individuals but by groups identifying themselves as "The Workers Revolutionary Collective" and "Occupy PHA." (Members have since recruited homeless individuals to be part of the encampment). Homeless Outreach workers who visited the site to offer housing and services were asked to stay away.

We understand that the encampment is a protest and we want to work toward a peaceful and equitable solution. At the same time, everyone recognizes that this is not a long-term solution to homelessness and we are concerned about the safety and health of the individuals there. We look forward to talking with members of the encampment to come to some accord."
Report a correction or typo
Related topics:
societyphiladelphiablack lives matterprotesthomelessben franklin parkway
Copyright © 2021 WPVI-TV. All Rights Reserved.
TOP STORIES
Andy Reid in stable condition at hospital
Trial for Montco teen charged with stabbing ex-girlfriend 30 times
Shooting outside Center City hotel under investigation
Record-breaking! 66-yard field goal makes NFL history
Mayor: 'I am heartbroken and outraged' after city tops 400 homicides
Cheryl Burke says she has COVID-19
NJ high school changes dismissal time due to bus driver shortage
Show More
2 shot after altercation in Wawa parking lot; suspects wanted
Can the Eagles defeat the Cowboys? Jaws has a final score prediction
Bus driver shortage, supply chain impacting Chester Co. farm's fall
Motorcyclist thrown from bike in fatal Kelly Drive crash
Whole Foods is adding a $10 delivery charge
More TOP STORIES News